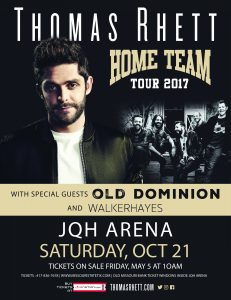 With “a sky‐rocketing Country career” (TODAY), ACM Male Vocalist of the Year Thomas Rhett is preparing for the highly‐ anticipated 2017 release of his third studio album, kicking things off with the “driving, sexy” (Rolling Stone) lead track “Craving You” featuring Maren Morris. New music follows seven trips to the No. one position on the Country radio charts and his PLATINUM certified release TANGLED UP DELUXE (The Valory Music Co.), which includes the 2X PLATINUM Grammy‐nominated six‐week chart‐topping smash “Die A Happy Man.” The record‐breaking track garnered major trophies from the Country Music Association, Academy of Country Music, Billboard Music Awards and CMT Music Awards. Thomas Rhett is exciting fans as he performs new music on his headlining 2017 HOME TEAM TOUR, one of Rolling Stone’s most anticipated tours of this year. After drawing capacity crowds overseas last year, he returns as a “force to be reckoned with” (Daily Star) with plans to return to Europe while also making his debut headlining run in Canada in addition to US dates. For more information and for a full list of upcoming tour dates, visit www.thomasrhett.com.

All dates, acts, and ticket prices are subject to change without notice. *Tickets may be subject to fees.