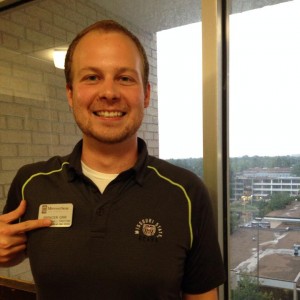 This week’s LeaderBear is Spence J.T. Orr. Spencer came to Missouri State in the fall of 2008 as a Music Major and a Centennial Leaders Scholarship recipient. During his time in the Centennial Leader’s program, he was active in a variety of university bands and ensembles including the pride marching band, concert band, symphonic band, and wind symphony.

Over time he gained increasing amounts of responsibility through involvement in residence life. He was a student desk receptionist in Wells House and an RA in Woods House and Hutchens House. Through his involvement in residence life, he discovered his passion for helping others and the field of student affairs. After graduating in 2013 with a Bachelor’s degree in geography/geotourism he continued at Missouri State studying student affairs in the Masters in Student Affairs in Higher Education Program. His first year in the program he was a graduate assistant in Residence Life as the Assistant Hall Director for Sunvilla Tower.

This year Spencer was promoted to a full time role as the Residence Hall Director of Wells House. He says, “I’m right where I need to be, being a champion for student success and going to school to finish my master’s degree in student affairs.”

It was recently announced that Spencer won the NASPA IV-West Region Graduate Student Rising Star Award.  This award recognizes outstanding student affairs professionals in higher education.  There is only one winner for each state and Spencer won the award for the state of Missouri.  If you would like to learn more about NASPA and the award process please visit: http://www.naspa.org/about/awards/regions/region-iv-west-awards.

“Coming to college can be a scary thing. I was worried I wouldn’t know anybody. Being a part of the Centennial Leader’s program helped ease this fear of mine. Immediately before even stepping on campus, I knew I’d meet people who were Centennial Leaders with me. We learned many things in Centennial Leaders, from leadership styles to our own strengths and how those strengths can impact the ways we interact with one another. One of my favorite take-aways would be working together as a group to plan a leadership conference for high school students. The centennial leaders program challenged me to grow and develop into the professional I am today.”

“Get involved. You’ll find you have a lot of free time coming into college, maybe more than you were expecting. There are so many opportunities to become a part of something here at Missouri State, don’t let them pass you by! If you’re looking for something to join, ask your RA, ask me, ask anybody! Don’t be afraid to reach out and try new things. Especially majors…. If you’re looking for a cool one, go to Temple Hall and check out the Geography, Geology, & Planning Department. In my own slightly biased opinion, Geotourism is the best major on campus”