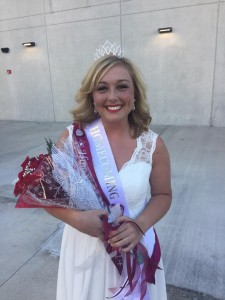 Missouri State University recently crowned it’s newest Homecoming Queen, Taylor Moody, who also happens to be this week’s LeaderBear! Taylor was sponsored by her sorority Alpha Chi Omega, and spent the week following the yellow brick road with her playful theme that was a take on the Wizard of Oz. She was crowned during halftime of the homecoming game on October 18, 2014.  Taylor’s charm and playful theme are not solely what won her the crown though.  She has been involved in a lot during her time here as an undergraduate.

Her freshman and sophomore year she completed our Centennial Leaders Scholarship Program which inspired her to go on and become a great leader.  Taylor served as the president for her sorority, Alpha Chi Omega, her sophomore year.  Taylor has also been a returning SOAR Leader and served as Student Panel Coordinator this past summer.  Her junior year she took part in another role for our leadership programs and served as a Commerce Bank Emerging Leaders Facilitator.  She will return in the spring for a second year as a facilitator, serving this time as the chair!

This semester, along with being crowned queen, Taylor also won the Dr. Don Aripoli Award for Impactful Leadership.  This award is given to a nominee that shows continued exemplary leadership in an organization or campus area for an extended period of time helping the organization/area grow.  She plans to graduate in December 2015 with a Bachelor’s degree in entertainment management.

Her top strengths that help her in all her leadership roles are: Adaptability, Woo, Positivity, Includer, and Developer.

When asked what about our programs impacted her the most she replied,

“Being involved in programs like Centennial Leaders and Emerging Leaders has allowed me to put my leadership skills to use and has given me the experience needed to make a difference in the organizations I am involved in.  I am so thankful that I was a part of the Centennial Leaders program my first two years at MSU, because it gave me the confidence I needed to take on leadership roles during my college career, and to impact Missouri State in a positive way.”

Her advice to younger students:

“Be yourself and take advantage of all of the amazing opportunities Missouri State University offers you. Be kind to others, do your homework, and make friends! Leave your mark on this campus and have the best time of your life!”