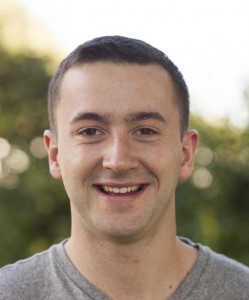 Our featured LeaderBear this week is Zane Clark, and he has a knack for being a leader. He was recently elected as the president of the Interfraternity Council for the 2015 calendar year.  Interfraternity council is the governing body of the 17 (soon to be 18) fraternities that are a part of Missouri State’s Fraternity and Sorority Life.  Zane will be the head of the 11 man council that works to monitor and improve the fraternity community.

Before taking on this role Zane was the president of his own fraternity, Pi Kappa Phi. Under his presidency his chapter was named Missouri State University’s Fraternity of the Year and was recognized by Pi Kappa Phi national headquarters for outstanding governance. He has also been involved in other areas of campus besides Fraternity and Sorority Life. Zane is a current member of SGA serving on the Wyrick Comission, a SOAR leader returning for his second year next summer, and a current district intern for U.S. Senator Claire McCaskill.

Zane has also recently represented the university on the 2014 Homecoming Royalty Court and was named FSL Male Sophomore of the year for the 2013-2014 school year.  To help him in his many leadership roles, Zane relies on his strengths of Strategic, Achiever, Futuristic, Individualization, & Focus. Oh and did we forget to mention he graduated the Commerce Bank Emerging Leaders Program in 2014.

“The Commerce Bank Emerging Leaders program allowed me to network and develop my leadership abilities alongside other great leaders at Missouri State. I learned how my strengths fit in and mesh with those who have strengths on many other ends of the spectrum of leadership. Through this program I made many lasting connections on the Missouri State campus and developed strong bonds of friendship and respect with the other participants. All this is to say that through this program I was able to discover how I may best lead and serve those I work with on a daily basis through self-realization and humility.”

“The first step in becoming a strong & ethical leader is simply taking on a position of responsibility. If will dig deep within yourself to find the willingness to take this first step you will surpass all expectations you ever had for yourself regarding your capabilities. There is a leader within every individual because you have valuable experience and ideas to bring to any situation. The key is identifying your strengths and how you may best translate those experiences and ideas into the format best suited for your current situation.”