This weeks Leader Bear is an individual with a lot of heart for the FSL community.

Connor Aller is a sophomore pursuing a major in Accounting and a minor in Chinese.  His top five strengths are competitive, analytical, restorative, futuristic, and achiever.  Connor has many past, current, and future accomplishments to be proud of.  His leadership roles in his fraternity, Pi Kappa Phi, include secretary (2014-2015) and president (2015-2016).  He has earned outstanding accomplishments through his fraternity including Brother of the Year for two years in a row as well as the David D Morgan “Extra Mile” National Scholarship 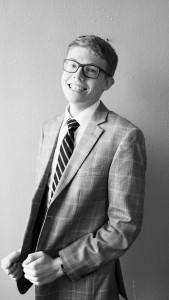 Recipient.  He plays an important role in SGA with being the current Director of Research and Development.  The position duties include creating surveys for over 3,000 Missouri State students to take.  He is a member of the Improv Team where he has learned to be a more confident speaker and performer.  Connor also works as the Fraternity and Sorority Life Student Specialist.

When asked what has impacted Connor the most, his response included..

“Working in the Office of Student Engagement has given me a behind the scenes look into Missouri State’s amazing leadership programs. Students who go through the Commerce Bank Emerging Leaders programs learn leadership lessons, life skills, and how to interact with peers. I have always had a passion for leadership development and it is nice to work in an environment that fosters that same success.”

When asked what advice he would give to younger students, his response included..

“Don’t be afraid to admit when you are wrong. Owning up to your mistakes as a leaders is one of the most challenging and rewarding things you can do. It isn’t easy, but you will learn a lot about yourself in those moments, I know I have.”

Thank you Connor for all that you do within each area that you place your passions.  Your work does not go unnoticed!