Our Leader Bear for this week played a huge role in planning the STAR Awards that took place this Monday, April 25th!

Ali Feris is a senior who is studying graphic design and will be graduating in a short two and a half weeks!  Her top five strengths include strategic, responsibility, maximizer, futuristic, and focus.

During her past four years at Missouri State University, Ali has taken several leadership roles with 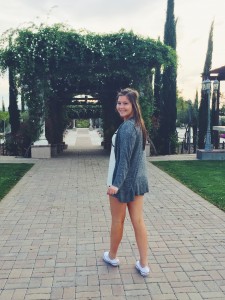 Ali has worked for the Office of Student Engagement as the Co-Curricular Involvement Student Specialist for the past three years where she works on entering travel paperwork, organization annual registration, and planning the tedious details of STAR Awards.  Those details include color scheme, flowers, linens, presenters, creating the introduction video, logos, invitations, tickets, programs, among many other things.

When asked what advice she would give to younger students, her response included…

“I know that this is something that you hear all of the time, but seriously get involved. But don’t just join something to put it on your resume, make the most of it. Out of the 360+ organizations on campus, there is one out there for you. From there, it is like a snowball effect and you won’t be able to/won’t want to stop. I came from a really small school where I was involved in anything and everything I could be and when I came to college, I thought that it didn’t matter anymore or that there was no way that I would be able to actually get in anything because there are so many students. Although, you have to make that leap and you won’t regret the friendships, memories and leadership skills that you will gain.”

Ali is a delight to be around and puts 110% into anything she does.  She has certainly created an impact on this campus and she will continue to do just that in all that she does with her future.