This week’s Leader Bear has a passion for using her leadership abilities within the organizations that she involves herself in.  Amy Brown is a junior expecting to graduate in Fall of 2018 who is currently studying History Education with a minor in Diversity Studies.  His top 5 strengths include context, contentedness, responsibility, consistency, and discipline.  She completed the Distinction in Public Affairs program in the spring of 2016.  She has involved herself in several areas on campus which have lead to incredible accomplishments in and out of the FSL community.

“I believe that some of my greatest 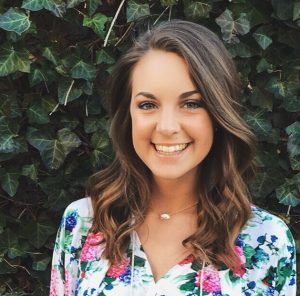 accomplishments have been through leadership in the FSL community. My freshman year after joining Sigma Kappa, I joined Phi Sigma Upsilon and was elected to the executive board as the VP of Recruitment. This was my first taste of leadership in college and I loved it! My sophomore year I decided to run for the Panhellenic executive board and was elected as the Director of New Member Education. Through this position I planned two New Member Day events, helped organize bid day, and served as an advisor to Phi Sigma Upsilon. This is my second year on the Panhellenic executive board, after deciding to run again as the VP of Recruitment. This year I will oversee all things recruitment for the Panhellenic community!

Outside of FSL, I have served as a representative in the Student Government Association for Sigma Kappa, participated in the Distinction in Public Affairs Program, and have served as a Peer Leader assisting first year students in GEP classes for two years.”

When asked what has impacted her through the leadership development programs, her response included..

“The Leadership Development Programs at Missouri State have helped me to discover what kind of leader I am and what kind of leader I can aspire to be. Through conferences and retreats, I have learned the value of many different styles of leadership and the ways in which we can all work together to reach a common goal. I have improved the ways in which I set goals, communicate with others, use my critical thinking, and consider overall what is most important to me.”

When asked what advice she would give to younger students, her response included…

“My advice to younger students would be to go after the things that interest you. College is the time to try out a lot of different things that you might not have time for in the future and make connections with people that will last beyond your time at Missouri State. Also, try to take on some sort of leadership. And don’t look at leadership opportunities as just resume builders, but as a chance to grow as a person. It is the times that I have been challenged within these positions that I have had my proudest moments and realized my true potential, which I would have never imagined that I possessed!”

Amy is an incredible example of what it means to lead with commitment and passion!  Thank you Amy for your great example on leadership!