Our spotlight this week is none other than Secoy Hodges!

Secoy is a senior Communication Studies major and hopes to graduate next fall. His top five strengths are: leadership, communication, patience, accountability, and listening. Through his time at Missouri State University, Secoy has been involved in many leadership positions across campus! 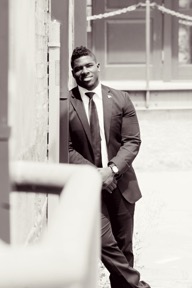 Secoy has been a state ambassador for the Missouri Department of Higher Education. Currently, he is an active member of Alpha Phi Alpha Fraternity, Incorporated and the President of the Springfield chapter of Student African American Brother (Saab): Brother 2 Brother. Also, Secoy is a business owner of Jewels of Success, and he is trademarked by the Boys and Girls Club of American and endorsed by United Way.

Secoy is the ambassador of Multicultural Resource Service here at Missouri State. He is also a paid actor and has starred in commercials with Circle K and O’Reilly’s Auto Parts. Furthermore, Secoy holds diversity training classes for the Springfield Police Department.

“Do not be afraid to fail. Get involved as soon as you can and fail as soon as possible. There is not growth without feeling uncomfortable.”