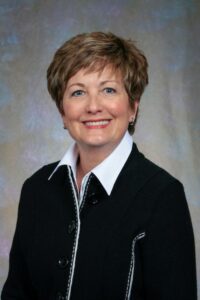 Growing up on a farm in St. Joseph, MO, Dr. Linda Pettijohn never expected to teach at a university, much less universities in Missouri, Louisiana, Illinois and Florida. During her time at Missouri State University, she played a large role in the development of Business Career Day and the Marketing Yourself class. Pettijohn was recently recognized on the Missouri State University Wall of Fame for her lasting contributions to campus as a Professor of Marketing.

On their farm in St. Joseph, her family planted tomatoes, beans, corn and other produce to sell to local vendors. She spent her summer detasseling corn for area seed growers. “My background did not suggest a potential career in academia,” says Pettijohn.

After graduating high school, Pettijohn enrolled at then-Missouri Western State College. She worked in a variety of retail establishments to pay for her education, advancing to Assistant Manager while in college. She earned a Bachelor of Science in Business Administration with a focus on Marketing and went on to achieve an MBA and DBA from Louisiana Tech University.

Pettijohn says, “When we arrived at SMSU, it was a campus ‘on the move.’ From academics to athletics, the university was moving toward excellence. The College of Business had a HUGE goal: AACSB accreditation. To achieve that goal, everyone had to up their game. It was fun and exciting!”

While working in the Marketing Department, Pettijohn had a personal goal to help students realize their potential for success in business and in life. She wanted students to understand that their experiences at Missouri State would enable them to achieve their goals. She played a role in the creation of Business Career Days in the College of Business, which evolved into the college’s current career fair. On these days, executives were invited to campus to speak, interact with students and recruit potential employees.

Thinking back on Business Career Days, Pettijohn says, “One of these events brought Richard Teerlink, the CEO of Harley Davidson, to campus. He was an exceptionally enthusiastic speaker who attracted not only our students but a Harley Davidson escort to campus. It was such a fun day.”

Furthering her goal of helping students realize their potential for success, Pettijohn advocated for the creation of a personal marketing class. She noticed that marketing students were not gaining the opportunities that students from other universities were obtaining. Many were first-generation college students and did not have the life experiences which would help them compete with students from more established universities.

As a result, the Marketing Department created the Marketing Yourself class to help better prepare students for their futures. The course focuses on interviewing skills, resumes and life skills not taught in other courses—personal budgeting, personal grooming and dress, interacting and communicating effectively with people from other cultures and educational levels, developing personal goals and objectives, developing exceptional etiquette skills and more.

Pettijohn’s many lasting contributions, including the creation of Business Career Day and the Marketing Yourself class, set her apart as one of Missouri State’s most distinguished faculty. On October 25, 2019, Pettijohn attended an induction ceremony where she was recognized on Missouri State’s Wall of Fame.

Pettijohn says, “Of all the honors I’ve ever received, this one moved me the most because it was student-driven… I’m humbled to be recognized as a result of my students’ achievements and their appreciation. It is a reflection of their success and achievements that I have received this recognition.”

Pettijohn has continued her work to help individuals realize their full potential through her company, EtiquetteIQ. She saw a need in the local community for the development of personal marketing skills. She took the Marketing Yourself classroom format and redesigned it for industry application. Through her work training company personnel on networking, dining skills, social media and more, Pettijohn found her greatest audience to be the Boys and Girls Club. The kids are now her primary focus.

When asked what advice she would give current marketing students, Pettijohn describes how she takes advantage of opportunities and takes chances that others might not take. “I recall at least one professor advised me to abandon my quest for a doctoral degree and to instead have children. I recall many such challenges—in fact, when I decided to inaugurate the Business Career Day, one person told me it would never work. The Marketing Yourself course met resistance from other faculty in the College of Business because it ‘wasn’t academic enough,’ ” says Pettijohn.

Despite her skeptics, today the College of Business Career fair attracts hundreds of employers and thousands of students, and the Marketing Yourself course has been replicated by other colleges and universities. Pettijohn says, “So, the major piece of advice I can give today’s marketing students is GET IN THE GAME.”