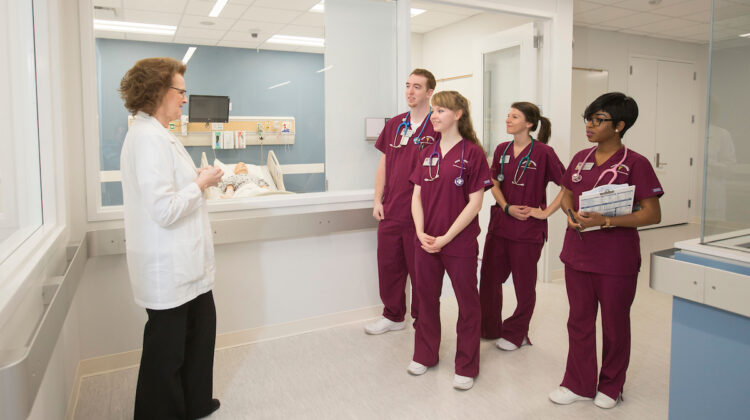 In a time when health care workers are in high demand, The Mid-America Transplant Foundation (MAT) is launching the MAT Scholarship for students enrolled in Missouri State University’s nursing program.

“We are humbled and honored at the gracious gift given to our students from MAT,” Monika Feeney, Department Head for the School of Nursing, said. “This scholarship will raise awareness for organ donation in the community by enabling nursing students to learn about organ donation and the importance of it to our community.”

This gift is in recognition of the critical role nurses play in the organ and tissue donation process in Southwest Missouri.

Ten scholarships at $1,000 each will be given to qualified applicants beginning with the 2023-24 academic year. The scholarship is part of the MAT Foundation’s focus on workforce development.

Nursing students interested in applying must submit an essay. The essay must include:

Scholarship recipients will travel to St. Louis to receive a tour of MAT facilities.

Salmon is a fish that’s good for you. There are several types, so which one is healthiest?

Recently, Dr. Leslie Echols, associate professor of psychology at Missouri State University, worked with Dr. Jerreed Ivanich of the University of Colorado to conduct a Fast Friends study. It looked at using questions and answers to foster friendships among middle school students.

This research was featured in the Greater Good Science Center at UC Berkeley’s recent list of the “Top 10 Insights from the Science of a Meaningful Life in 2021.” The annual list highlights what the center sees as the most important, provocative and inspiring findings published about “the science of a meaningful life.”

As environmentally conscious as organizations try to be, new technology and other products are still developed that may negatively impact the earth or human health long-term.

That’s why scientists are constantly putting these items to the test and asking questions for the greater good.

When you have an accumulation of metals, Durham explains acid rain can cause the metals to leach into the soil, then seep into the groundwater.

“Then animals, including ourselves, can be exposed to that,” Durham said.

In a current study, Woodman says they are experimenting with what this exposure could cause to different organs and tissues.

“If you’re ingesting of some of these metals, you would expect the gut would be one of the first places that you would see it,” she said.

In their study, the colon and gut microbiome are among the most affected.

Read the transcript from the gas sensor project interview

Water sensors are developed to detect metals and other contaminants in natural water sources. But these water sensors can become unreliable due to bacteria.

Woodman and Durham are simulating different conditions to test how long these sensors can be reliably used. They’re also wondering what modifications could be made to prevent bacterial growth on the sensors.

Explore the Center for Biomedical and Life Sciences

“We’re doing some shorter term and also some longer term studies,” Woodman said, “on what we can do to prevent malfunctioning of these sensors due to growth.”

Although the water sensor project is ongoing, Durham says the preliminary findings are revealing some unexpected differences between water sources and water collected at different points throughout the year.

“Well water actually is fairly clean. There aren’t as many microorganisms,” Durham said. “You can imagine the pond water is the worst…Pond water in April is not the same pond water in August, though, during the dog days. And the rivers seemed to be a little bit more consistent.”

This information is important to identifying what kind of materials will be better for future water sensor designs, he noted.

Read the transcript from the water sensor project interview

His lab is now collaborating with Dr. Wafaa Kaf, professor of audiology, on the intersection of migraines and sensitivity to sound, or phonophobia.

“A lot of focus in the research world has been on photophobia and trying to come up with ways to minimize the impact of flashing, strobing and bright lights,” Durham said.

But migraine sufferers often report phonophobia as the most bothersome symptom, according to Durham.

“Migrainers can actually hear a fluorescent light all of a sudden,” he said. “Or there’s a sensitivity to loud sounds. The children’s volume hasn’t turned up. Your sensitivity to it has turned up.”

To better understand the connection between hearing and migraine, Durham and Kaf partnered to purchase a piece of equipment – all in hopes of providing insight to create an effective treatment.

It all starts with sound producers – like ear buds – and probes placed on the near and forehead, Woodman explained.

“These probes will detect how various parts of the brain and the spinal cord respond to different volumes and tones,” she said.

“This cross pollination [of departments] allows you to unlock mysteries of things and understand how things are really happening,” Durham added.

Read the transcript of the interview about hearing and migraines