Congratulations to Missouri State University’s “Bear Battalion” Army ROTC Ranger Challenge teams. Over the last eight weeks, these Cadets put forth an extraordinary effort to hone their skills as a team. The teams consisted of students with a variety of majors and academic classes ranging from Freshmen to Graduate.

The Ranger Challenge competition involves a variety of tasks that require a combination of technical and tactical skills based on Army doctrine. The competition requires a high degree of physical fitness and teamwork.

On October 13th, Cadets from Missouri State University’s Army ROTC took first and second place against teams from a dozen other schools across Missouri, Kansas and Illinois. The competition took place at Ft. Leonard Wood, MO. Teams raced through an obstacle course, tested on medical and radio skills, utilized their knowledge of Army doctrine, built and crossed one rope bridges, put their land navigation skills to the test, and completed various fitness challenges; all while carrying a military-style backpack and M4 rifle nearly 20 miles through the entirety of the course. 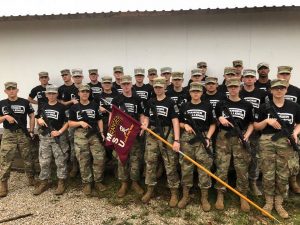 The MSU “Bear Battalion” will compete in the Brigade Ranger Challenge on November 2nd with a home-field advantage at Ft. Leonard Wood, MO. We wish them the best of luck as they go forth to compete at the Brigade level!