Flying south to study the heat in a very cold spot

Cold and sunburned, Missouri State University professor Dr. Kevin Mickus trudged with his fellow scientists through the snow and ice to study Mount Erebus, the southernmost active volcano in the world. It’s a long way from his home in Missouri, but the opportunity to apply his knowledge of geophysics in Antarctica was a unique and exciting opportunity – even if the conditions were extreme.

“This is one of maybe three or four volcanoes in the whole world that when you go up to the crater you can see lava. This one you get to the top and you look down, and yep, there’s a lava lake down there – you can see it bubbling,” Mickus said. “Recently, the floor of the crater has risen 90 feet and there has been stuff shooting out of the volcano.” 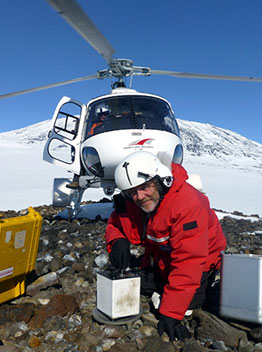 Mickus’ primary focus in Antarctica is conducting gravity readings to determine any changes in the magma levels and confirm the seismic results.

Mount Erebus is classified as active due to its frequent Strombolian eruptions – an eruption of light, magma and rocks that happens after bubbles are formed due to a buildup of gas – but it has infrequent ash eruptions and historically rare lava flows. Actually, the lava flow for decades has been confined to the inner crater. Mickus noted that it’s thrilling work, but he hasn’t really been concerned about a destructive eruption.

That all may change, though. The volcano hasn’t erupted since 2011, but it’s near two scientific research bases (McMurdo Station and Scott Base), so it is monitored regularly for safety precautions. Another research team conducted seismic research of Mount Erebus a few years ago and found some regions that indicated it was hot. So Dr. Phil Kyle, a scientist from New Mexico Institute of Mining and Technology who has studied in the region for approximately 40 years, invited Mickus to join the team in 2012.

Using a gravity meter on loan from the Department of Defense, Mickus’ primary focus in Antarctica is conducting gravity readings on Mount Erebus to determine any changes in the magma levels and confirm the seismic results. 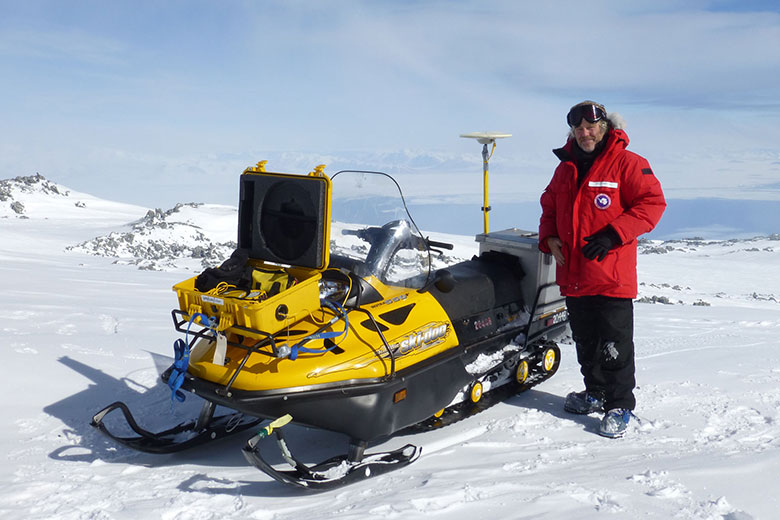 Approximately six miles deep inside the crater lays a mass of magma, noted Mickus. With the gravity meter, he hopes to determine the movement pattern of that magma or definitively say whether there is heat conducting near the surface. This heat source has caused a unique and dangerous geological feature to form – ice caves.

Mickus researched in Antarctica again in November and December of 2013, and currently is writing proposals to continue his studies with the hope of taking a student research assistant on a future trip.