Dr. Michael Reed can distinctly remember when he became interested in the universe and its contents: the moon landings in the summer of 1969.

“I remember those very clearly, mostly for how boring they were,” said Reed, professor of astronomy at Missouri State University. “You waited forever for them to have a two-minute video, which was horribly fuzzy.”

Despite the lack of entertainment he seemed to get from watching the landings, they were one of the first things he thought of when deciding what to study in college. The rest, as they say, is history.

The “sounds” of sweet harmony

“Imagine you’re listening to an orchestra. Every instrument has its own set of sounds, and stars are just like that.” — Dr. Michael Reed

With help from funding through NASA and the National Science Foundation (NSF), Reed is currently studying how stars vibrate with help from NASA’s Kepler spacecraft. This space telescope orbits the sun, and in its original mission, observed one set of stars, taking a picture every minute, for four years. Now in its extended mission, it looks at a different set of stars every 90 days, providing the most accurate data ever obtained with accuracies down to one part in a million.

Reed and his team analyze these images to see the stars’ vibrations and discover what is going on inside.

“Imagine you’re listening to an orchestra,” said Reed. “Every instrument has its own set of sounds, and stars are just like that. They have a whole bunch of variations within them, and each of those variations tells you something about a different region inside of the star.”

Reed then classifies the different vibrations, or instruments, coming from the star. But how does learning about these vibrations help us here on Earth?

“These are stars that our sun will be like in another five billion years,” said Reed. “By understanding these stars, we can understand what’s going to happen to our solar system and the environment of our solar neighborhood in the far future.”

Getting good vibrations from Kepler

Kepler was launched in March 2009 with a mission to discover new planets over a four year time frame. The telescope was able to discover these planets when they passed in front of stars, causing a light blockage known as the transit. Unfortunately, researchers cannot tell how big a planet is unless they know how big the star is. That’s where Reed’s research comes in.

“Only in the cases that the star is pulsating, known as a variable star, do they know the size of the star because asteroseismology tells you that based on its vibrations,” said Reed. “That, in turn, gives you the size of the planet.”

Researchers, such as Reed, who are outside of NASA, are able to apply for observations during Kepler’s extended mission. In other words, an astronomer can ask NASA, “Could you focus on this star for a while?” So far, Reed’s observing programs have been approved during each extended campaign.

“In the big picture, nothing has advanced asteroseismology as much as Kepler….” — Dr. Michael Reed

Over the last 10 years, Reed has received more than $1.2 million in funding to advance his research. His collaborative team has published more than 15 papers where they have unveiled differences in the chemical stratification within these stars, discovered stars with close companions, and even one which spins more slowly in the center than at the surface.

“In the big picture, nothing has advanced asteroseismology as much as Kepler, quite frankly,” said Reed. “Our knowledge of the insides of stars has really gained huge ground from this spacecraft. Observing in that way has profoundly changed our view of the universe.”

Reed’s collaborative team, which consists of fellow professors, graduate and undergraduate students, received their most recent transmission of data in July 2015. The team will process and analyze these data, possibly helping the science community learn more about helium fusion, planets outside our solar system and our solar neighborhood as a whole.

Recording history to save it

In the 1800s, hundreds of steamboats sank on the Missouri River. Because the river has shifted many times, wrecks litter the valley beneath corn and soybean fields and contain a treasure trove of history.

A famous wreck is the steamboat Arabia that sank in 1856.

“They had everything from shoes and boots – there were 4,000 of them – all sorts of sets of dishes, kegs of different size nails, picks, any kind of tool,” said Dr. Neal Lopinot. “Really it was a steamboat full of merchandise that was going out to the frontier. Some of it was nice stuff, too, but most of it was utilitarian.”

Lopinot is a research archaeologist and director of Missouri State University’s Center for Archaeological Research, or CAR. Ensuring that such remains are not destroyed is one of the many projects that keep the doors open at CAR.

The center is a research institute that conducts archaeological field work and other cultural resource management projects on a contractual basis, primarily for government agencies. 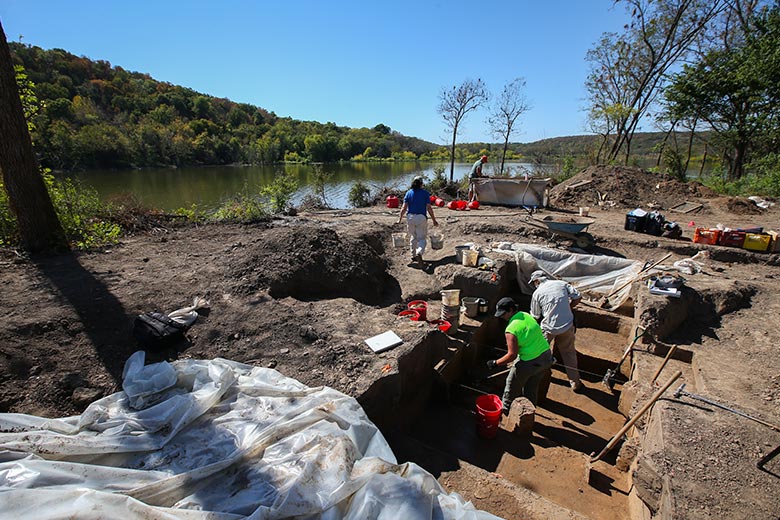 The excavation team makes progress at the Oklahoma dig site. They planned to go down to about 3.1 meters, and stand about 1.6 meters deep.

Since 2012, CAR has been employed to survey several former islands along the Missouri River where the United States Fish and Wildlife Service and Army Corps of Engineers wanted to dig trenches to recreate spawning grounds for the endangered pallid sturgeon.

“They’ve lost their primary spawning grounds so the population’s diminished; they’re trying to recreate that,” said Lopinot. “Not just for the pallid sturgeon, but that was the main focus of it; but there are lots of other fish that also spawn in those kinds of situations. Also it increases wildlife habitat, wetlands.”

Before the trenches were dug, Lopinot and a team of researchers from CAR used magnetometry to see if there were any steamboat wrecks in those areas. They found the remains of at least one boat. 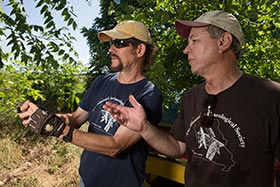 “They decided to move the trench to avoid impacting the buried steamboat wreck,” he said. “Just about every steamboat wreck is considered to be eligible for the National Register of Historic Places, which means they’d probably have to mitigate it, which in turn means a major and very costly excavation.”

Lopinot is the primary person writing proposals and responding to requests from agencies that want to hire a group to undertake archaeological surveys and excavations. The center raises an average of about $250,000-300,000 a year in grants and contracts.

Many of CAR’s projects are work that is required by the National Historic Preservation Act. The search for steamboat remains was based on Section 106 – it involves finding out if there are any significant archaeological remains in a specific area before any work is done that might disturb the remains.

Another type of research is based on Section 110 – documenting and preserving archaeological sites. CAR has recently been involved in Section 110 research at the Three Finger Bay site on the Gibson Reservoir in northeast Oklahoma. Prior studies have found archaeological remains on a finger of land extending into the reservoir. CAR researchers have been excavating a section to determine the significance of the site.

The center has been involved in a number of prominent archaeological studies including Big Eddy, Delaware Town and the Trail of Tears. 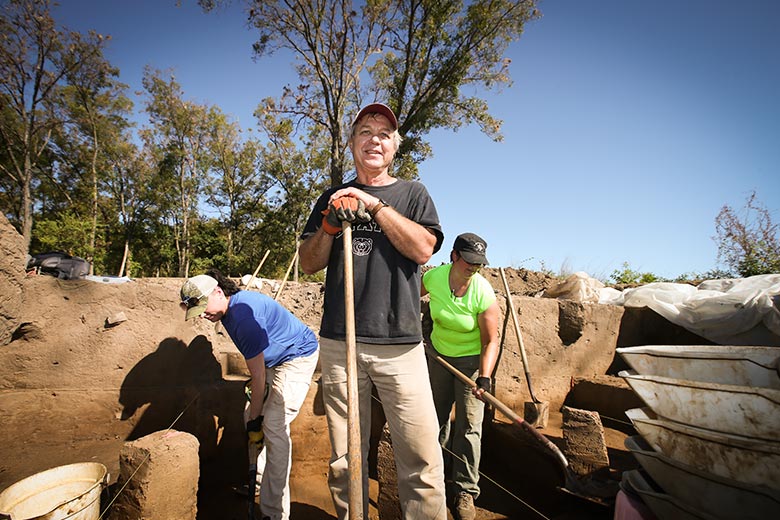 Dr. Lopinot and his team digging at the excavation site in Oklahoma

Digging in the dirt

On a beautiful fall day in the Ozarks, Lopinot spent the day digging in the dirt – one of his favorite parts of his job. Along with CAR Project Supervisor Dustin Thompson and three other archaeologists (including two MSU alums), the team methodically skimmed dirt from an excavation area and then sifted through the dirt to find any artifacts.

On that day, the main part of the excavations was down about 1.6 meters deep and they planned to go down to 3.1 meters. 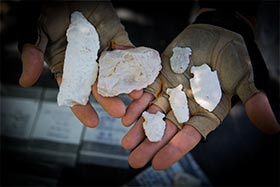 “It looks like the site was intensively occupied during what we call the Middle Woodland Period – about 100 BC to AD 400. There are other periods represented as well,” said Lopinot. “We’re going to dig a lot deeper, and we’re hoping that we find much earlier deposits that are relatively un-mixed. Hopefully there’ll be a little charcoal that we can radiocarbon date.”

Stone artifacts cannot be dated because the method requires carbon from formerly living plants and animals. At this site, they have been looking for plant remains such as hickory nutshell fragments or wood that has been carbonized. Bones and shells can also be dated because they are also from once-living animals. In dating stone artifacts, for example, an archaeologist tries to find dateable materials as close vertically and horizontally to those artifacts, documenting the precise location of each. 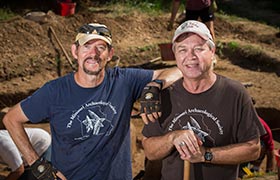 Lopinot and Jack Ray, CAR assistant director and research archaeologist, recently had some of their research from the Big Eddy site near Stockton, Missouri, published in the “Proceedings of the National Academy of Sciences” and Lopinot was the principal author of an article published on the construction of Monks Mound, the largest mound at the largest site in North America, in the “Midcontinental Journal of Archaeology.”

Explore the excavation sites of the Center for Archaeological Research