Eye to eye or eye for an eye

"No one thinks of himself as a terrorist. Not even members of Boko Haram," said Dr. Bukola Oyeniyi, assistant professor of history at Missouri State University. 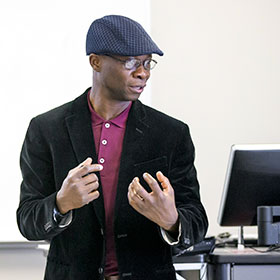 Oyeniyi has spent the last 10 years researching the roots of terrorism in West Africa. Looking at the Latin root “terrorem,” which means to instill great fear or dread, and “terrere,” which means to fill with fear or to frighten, he defined terrorism to include individual, group and state activities.

“The definition is always what others do to us. It’s always going to be a guy or group on the other side of the street,” he said.

Although approximately 50 such agitators or groups exist in West Africa, Oyeniyi has written and presented extensively on Boko Haram, which has garnered much attention from the media since it was assembled in the early 2000s. According to Oyeniyi, this group is easier to study than most since the founder Muhammed Yusuf recorded sermons and distributed them widely in the form of CDs, DVDs and leaflets in the early 2000s.

“There are people who will come out boldly to address the public in the form of open air preaching. What are they agitating for? Their belief system,” Oyeniyi stated.

The initial sermons are contraband now, but founding members of Boko Haram can serve as a lead for Oyeniyi. These ex-members offer insights into what drives the agitators to don the suicide vest. Moreover, these former members also could bridge the gap to begin peaceful negotiations.

As a social historian, Oyeniyi looks for patterns within the movements of specific groups and traces the roots of the conflict. Tracing the trends, he is able to build a profile of what an agitator group looks like and what the likely outcomes could be. He begins to postulate: What are they really fighting for? How are they getting their training? Who are their allies? Who funds them? Then, he and his collaborators create suggestions and form conclusions that the government can work with to address the root of the issue.

As much as possible, I want to see a world where we are all free. Free to express our anger against established institutions and individuals and also free to be corrected. So I long to see a Nigeria that is peaceful. I consider this my own way of contributing to it by exposing what is going on. 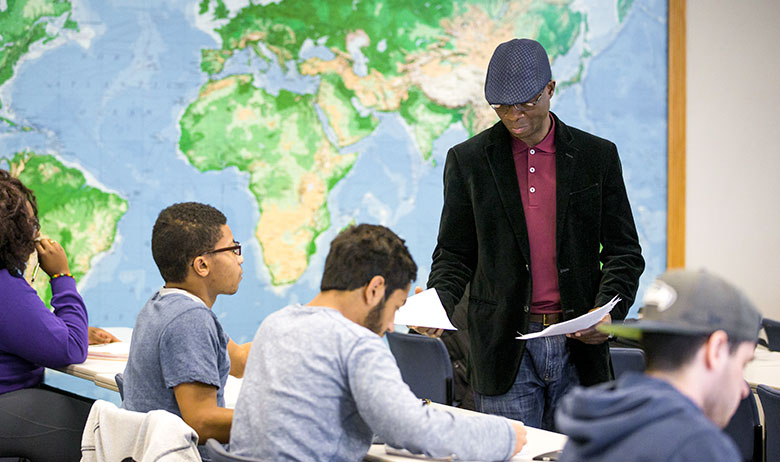 What he has to say might shock you. He understands Boko Haram’s complaints.

“They are requesting something, part of which includes the fact that the nation-state is, as it is, not properly governed,” said Oyeniyi. “So they have social grievances, and they have also what I call greed.”

Their grievances are at least, in part, related to a religious struggle as old as time. Two categories of Muslims abound in Nigeria: those who believe the Quran is not open to interpretation and want to see Sharia law enforced as the indisputable law of Nigeria; and those who see the Quran as open for interpretation and therefore welcome innovations, like Western education. In Nigeria, the second category is the majority.

If you eliminate Boko Haram today, you still have 49 other groups to deal with. It should not be about eliminating a group or set of groups, but looking at the causes.

One of the primary reasons behind the formation of the Boko Haram – which means Western education is a taboo – was the removal of innovations from Islam. Since the colonial period, there is no dearth of groups crusading against this, and these groups unite in their belief that other Muslims, especially those in power, are corrupt. Since 2000, Boko Haram has engaged in heated ideological and doctrinal debates with other Muslims, who found the group’s teachings unwelcoming to progress and sought state intervention to rein the group in. 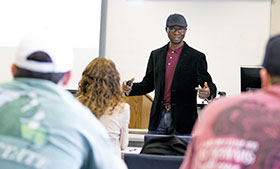 In addition to ideological disparity, socioeconomic issues like abject poverty, endemic corruption and unemployment are driving Nigerians to desperately rise up against the state. Police brutality and excessive and misuse of military force also contribute to these social grievances, as evidenced by the fact that the initial targets of Boko Haram was the police, not civilians.

“The state itself needs to understand at what point human rights kick in. Boko Haram may be a terrorist group, but they also have fundamental rights that must be respected. We must recognize this if we’re going to fight and win against Boko Haram,” said Oyeniyi. “As things are, the government has failed to realize that dissatisfaction in the eyes of man will almost always force him to take radical actions.”

In summer 2015, Oyeniyi traveled to his homeland of Nigeria to collect documents Boko Haram released before they decided to go underground. Now, he will translate and make them available in the form of a book. By doing so, he hopes to gain further insight into what genuine concerns stand behind the rhetoric.