Dr. Adena Young-Jones spends a lot of time investigating student success. How can faculty and academic advisors create the best dynamic for students? What motivates students? What increases student retention? 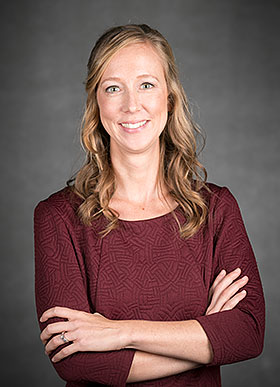 Moving the needle for middle schoolers

The class – now a required course for all psychology majors – also involves presenting Diversity Pep Talks at local middle schools. Since middle schoolers are at such an impressionable age, Young-Jones and her students lead discussions and activities in hopes of teaching the children to celebrate diversity – of skin color, race, religion, weight and socioeconomic status – and build empathy. Young-Jones is proud of the program: When the university received the 2014 President’s Higher Education Community Service Honor Roll award, these diversity workshops were cited as one of the factors. Building on the success of the pilot semester, Young-Jones is trying to find methods of tracking long-term effectiveness of the program. This would be novel since 81 percent of diversity training courses reported having no follow-up effectiveness measurement, she added.

Young-Jones, associate professor of psychology at Missouri State, believes she’s personally experienced advantages related to her ethnic-cultural background, and she’s passionate about helping students of all backgrounds achieve fulfillment and success. Her interest in students’ educational success has led to more than 20 published articles in the last 10 years on these and related topics.

Bullying and diversity are two focal areas related to student success, she noted. So, she developed curriculum for a Psychology of Diverse Populations course, which allows students to discover subconscious preferences, evaluating these subtle prejudices so that they may grow past them.

This work requires Young-Jones to lead complex, sensitive classroom discussions. She maintains civility and respect by reminding students, “You are the expert in your shoes,” and cautioning against generalizations and accusatory “you” statements.

The students also serve as a primary source for one of her long-term research projects: In collaboration with Dr. Donald Fischer, the students take the Implicit Association Test – a test developed by Greenwald and colleagues in the 1990s – at the beginning and end of each semester to reveal potential underlying bias.

Words or images flash on a computer screen, and participants quickly sort these according to instructions. Categories may include black or white faces paired with good or bad words. Accuracy and speed are averaged across trials for each person.

“Scores are based on reaction time, and the test evaluates automatic preferences individuals aren’t even consciously aware of,” said Young-Jones.

Young-Jones explained that in the context of contemporary society, prejudice is often expressed through subtle words and actions that are easily justified and difficult to detect. Many people understand it’s not socially acceptable to be overtly racist but may neglect to recognize their own prejudices; this dynamic can decrease the reliability of data gathered solely from explicit surveys.

“Because of social desirability, we want to see ourselves in a positive light. Students may say, ‘I’ve just taken this diversity class, so my prejudices are decreasing,’” said Young-Jones. However, to evaluate the full spectrum of individual bias, the combination of both implicit and explicit measures are necessary.

Since 2012, Young-Jones has collected implicit and explicit data in her classes. Three explicit self-report scales include the Modern Racism Scale, Explicit Racial Resentment Scale and Motivation to Control Prejudicial Reactions Scale. Results reveal that the motivation to control goes up from pre- to post-, which indicates that students wish to reduce prejudice. In addition, the Modern Racism Scale score decreases, which again is positive. Overall, the explicit and implicit results continually demonstrate the positive impacts of diversity curriculum.

Shining a light on insensitivities

But one woman who took Young-Jones’ class in spring 2016 recalls that these shifts in perspective weren’t always simple or seamless. One day, the class watched a preview of the documentary “Dark Girls,” in which a character made a derogatory comment about the appearance of African-American women. Unbeknownst to Young-Jones, another classmate laughed at the comment, which set off a flurry of reactions for one student. An African-American woman left the class in tears, with a strong sense of rejection and alienation.

Instead of being silent and feeling resentful, however, she expressed her concern to Young-Jones. This experience prompted deeper classroom dialogue about inclusiveness, group dynamics and word selection.

“We started to talk about the real issues. People were saying things that were insensitive – and I don’t think they realized they were being insensitive,” said the student. “My classmates seemed to think that racism existed out in the big, ugly world, but that it wasn’t present in our classroom or on our campus. These conversations revealed prejudice that existed right in our own environment.”

Young-Jones’ student noted that this conversation – and others that occurred when the class discussed LGBTQ individuals, weightism, gender biases and classist attitudes – was only productive because students of all backgrounds were willing to set their sensitivities aside so the discussion could continue.

“If we want to get anywhere in this, the listener’s job is not to be too sensitive,” said the student. “Young-Jones was very instrumental in keeping the conversation going.”

Five things to know about bullying:

No one wants to be labeled prejudiced, and a similar stigma exists against being labeled a bully or bully victim. Young-Jones conducted a survey of students asking whether the individual had been either a perpetuator or victim of bullying. Eighty-eight percent claimed not to have been bullied. Young-Jones purposely left the definition of bullying out so it was open to interpretation. Throughout the survey, however, 49 percent of the respondents claimed to have been the victim of many bullying acts (i.e., verbal harassment, physical violence, peer exclusion, property damage and cyber bullying).

With the media attributing teen suicides and shooting to bullying, individuals may not feel the harassment they have experienced to be in a similar realm. It’s like the definition of bullying is too harsh or too lax, like, everybody does it.

“Participants who described themselves as either a current or past bullying victim had significantly lower overall academic motivation scores then respondents who did not,” she said. “Even if they haven’t been bullied in years, they still scored lower on autonomy and competence, which are two of the three basic psychological needs according to Deci and Ryan. This directly impacts academic motivation and performance.”

These results, which are published in Social Psychology of Education, are problematic because Young-Jones wants all students to succeed. Consequently, such victimization is central to Young-Jones’ continued research.

“Student success is broadly defined,” added Young-Jones. “It’s not just about the grades, but seeing the world from a different perspective.”