“Imagine you’re making a pie,” Dr. Telory Arendell says. “You make the crust, put the filling inside and put the crust on top. Then you go around the top and shave off the part that’s extra, the part you don’t need.”

But why do you think you don’t need it? Maybe only because you’ve been told it’s not part of the pie.

“For me, that ‘extra’ is what’s actually most important, even though many people would throw it away,” Arendell says. And she isn’t really talking about pie.

Arendell, associate professor in the department of theatre and dance, uses this metaphor to describe her favorite theatrical experiences – moments that surprise the audience because they don’t quite fit our expectations of a night at the theater.

“When I write about movement on stage, I try to recreate the action with words that dance.” — Dr. Telory Arendell

“Performance art, experimental theater, what was called ‘happenings’ back in the ’60s,” Arendell says. “I love that stuff.”

Audiences sometimes worry that without the familiar rhythms of the theater, without clear heroes and villains and the promise of a resolution by final curtain, it will be hard to understand what’s happening on stage.

But, Arendell says, “You understand it in a different way. Sometimes you know fully that what’s most important isn’t what’s being said, but what’s happening between the lines. That’s my space: what happens between the lines.”

Arendell draws inspiration from experimental artists like German choreographer Pina Bausch, who is the subject of her next book.

“Pina Bausch was wild,” Arendell says. “She took highly technically trained dancers and put them on stage and had them do movement, such as stumbling, that wasn’t technical at all.”

And, according to Arendell, subverting the audience’s expectations was the point. “She was so conscious of what was expected, and then put up something completely different. It was a critique of what people like to call ‘high art.’” 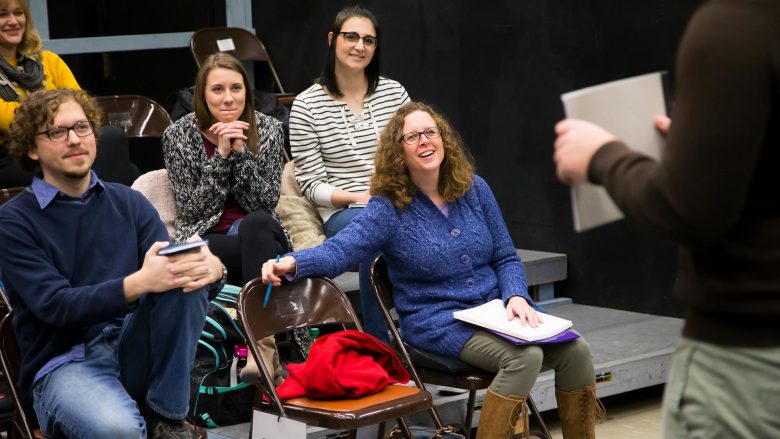 In many ways, performances that don’t conform to expectations connect with another of Arendell’s research areas: disability studies.

Someone who is living with a disability may experience the minutiae of day-to-day life in ways that are profoundly different from the majority of the population. When performers are free to venture outside expected theatrical norms, they can shift the perspective of audience members who don’t have personal experiences of disability.

Arendell has explored this connection in two books: “Performing Disability: Staging the Actual” and “The Autistic Stage: How Cognitive Disability Changed 20th Century Performance.” Her perspective is grounded in the idea that disability should be viewed as a “facilitating rather than a debilitating experience.”

As she puts it in her writing: “We become richer each time we come to understand these new perspectives, and performance powerfully enables our understanding of them.”

“Even off the stage, in life, people move in space in ways that tell stories. It’s a message that’s communicated with the body.” — Dr. Telory Arendell

For example, imagine watching a play you’ve seen before. But this time, it’s in a language you don’t understand. You could rely on your memory of the story, gleaning additional meaning from performers’ body language and tone. This is not unlike the way someone with nonverbal autism might piece together information that’s delivered through words they find incomprehensible.

Or, another example: imagine a performance where actors contend with props, sets and furniture that are either much too small or much too large – all while trying to perform the play as it was written. This might offer a glimpse of how someone with a physical disability navigates spaces that were designed with only one type of physicality in mind.

And these are just a few instances of how experimental performances, the “wild stuff” Arendell loves, provide opportunities to broaden perspectives. Theater, she believes, is an ideal place to showcase disability as something other than a deficit. It can instead be considered an “extraordinary experience.” Literally, “beyond the ordinary.”

In “Autistic Stage” she writes, “My own work explores how the performing arts have embraced autism as a set of new perspectives that change the way audiences conceive of space, time, personhood, embodiment, communication, and stage or film imagery.” 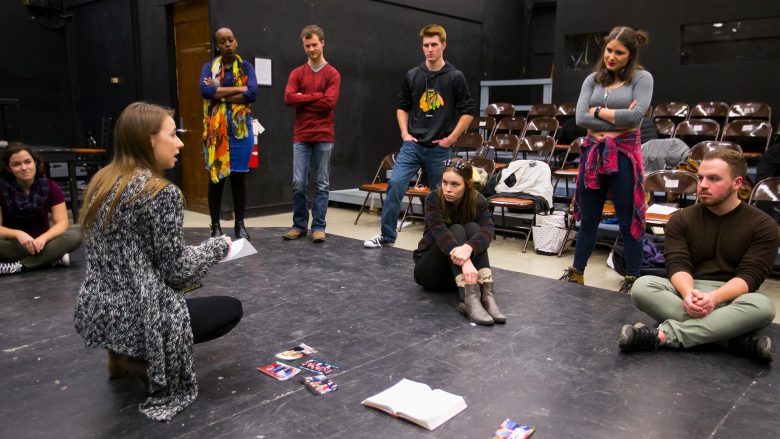 Arendell brings this research into her teaching. In addition to working closely with the disability studies program, she challenges her theater students to think about their work in radically different ways.

“My class ‘Scripting and Performing’ brings in students who have never done performance art or experimental work,” she says. It offers them the chance to re-envision the scope of their talents.

Returning to the pie metaphor, Arendell says, “Their impulse is to scrape along the edges of the pie tin. I pick up the edges that are set to be thrown away and say, ‘This is the heart of what you’re doing. This is where your story lies, where you’re not trying to fix yourself so you’ll fit into an established category.’ I say, ’This can be your category.’”

With a mortar, pestle and a little bit of the South American native barbasco root, you can make a natural piscicide, or fish killer. The active compound? Rotenone. It is an archaic yet effective method of fishing for some tribal cultures.

This root is not the only source of rotenone. It is found in plants in North and South America, southeast Asia, the southwest Pacific Islands and even southern Africa.

Research has shown that when humans are exposed to rotenone through injection or inhalation, they develop tremors similar to those experienced by Parkinson’s patients. That’s why its use as a pesticide has been banned in the United States.

“I’m interested in natural product biosynthesis, which is just a jargon way of saying the process by which nature makes chemicals.” – Dr. Matthew Siebert

So is it safe to eat fish that died of rotenone exposure?

“It has to get in your bloodstream,” said Dr. Matthew Siebert, assistant professor of chemistry. “If it’s going through your digestive system, there’s little risk.”

Siebert and graduate student Adam Kirkpatrick conducted a series of experiments to identify the final few steps in the development of rotenone. During this study, which was later published in the Journal of Physical Chemistry A, they concluded there are two ways rotenone is created naturally.

Once you understand how the pieces of a puzzle fit together, it is easier to solve. Similarly, noted Siebert, when scientists make a discovery about how a process like this works, they are able to use that knowledge to develop antidotes for combatting harmful chemicals. His study, he noted, has the potential to assist in the development of new pharmaceuticals to fight Parkinson’s and other disorders. 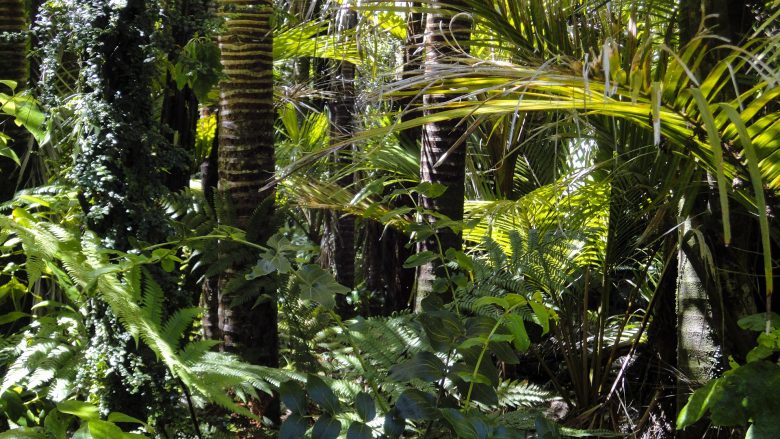 The barbasco root can be found in the Amazon region.

Boeravinone, one of the compounds in the same class as rotenone, has been a focus for Siebert in research experiments. These projects, which he’s conducted alongside Kirkpatrick and Cailin Weber, an undergraduate student, have great potential to help cancer patients who have built resistance to treatment.

“What we are able to say is the way the chemical wants to react is this way or that.” – Dr. Matthew Siebert

“These compounds inhibit that resistance. They knock out that cancer’s defense, which makes treatments that had become unhelpful an option again,” said Siebert.

Since this compound has such profound possibilities, Siebert’s team examined the processes by which boeravinone was created, and the viability of one path over another.

They discovered the most likely path for boeravinone creation was through the use of free radicals. Since free radicals are usually considered harmful in the body – they form due to environmental factors as well as stress, poor diet, stress or smoking – this was a surprising finding.

“As humans, we try to ingest antioxidant-rich foods to get rid of free radicals,” said Siebert. “But there are plenty of human processes that use free radicals, so it was interesting to see that mirrored in this plant.”

To make these determinations, Siebert looks at the type of atoms in the molecule, how many electrons are present and the energy determining factor inside the molecule.

Their studies, he said, are trying to reveal the “energetically favorable thing to do,” or the most likely way a reaction occurs.

When Siebert decided to investigate the very first step into rotenone development, he was surprised: Nobody had ever tried to understand it. 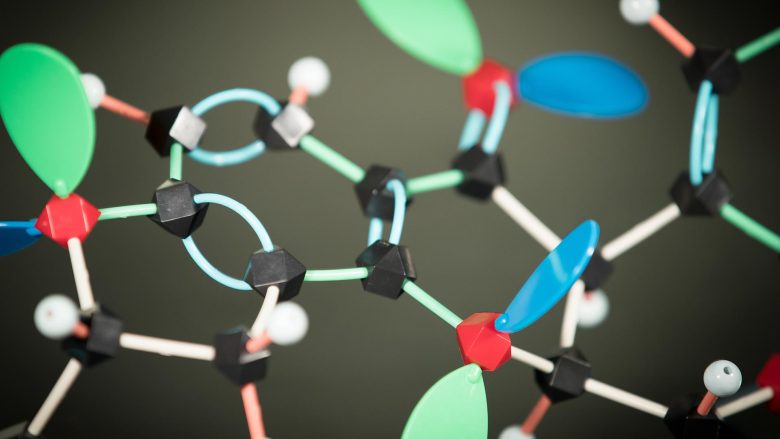 Siebert calls himself an applied theoretical organic chemist, which means you won’t find him concocting chemical brews in test tubes. Instead he’s using quantum mechanics as he’s creating models, providing insight into chemical reactions and carrying out reactions in the virtual world.

“A lot of scientific research these days is done through computer programs and modeling software to help us see what we can’t see with the naked eye,” said Weber. “I like that we are using the forefront of technology to perform research.”

Although it sounds anything but basic, Siebert said it’s, “basic science. It’s like the old saying that says we’re standing on the shoulders of giants.”

In a field that tries to explain natural reactions, it seems that the possibilities are endless.

People go to local restaurants and pick up used fryer oil to convert to diesel. Since most passenger vehicles don’t run on diesel, it has limited use. But Dr. Matthew Siebert and Zach Wilson, graduate student, presented research at American Chemical Society about how to get gasoline from biodiesel.