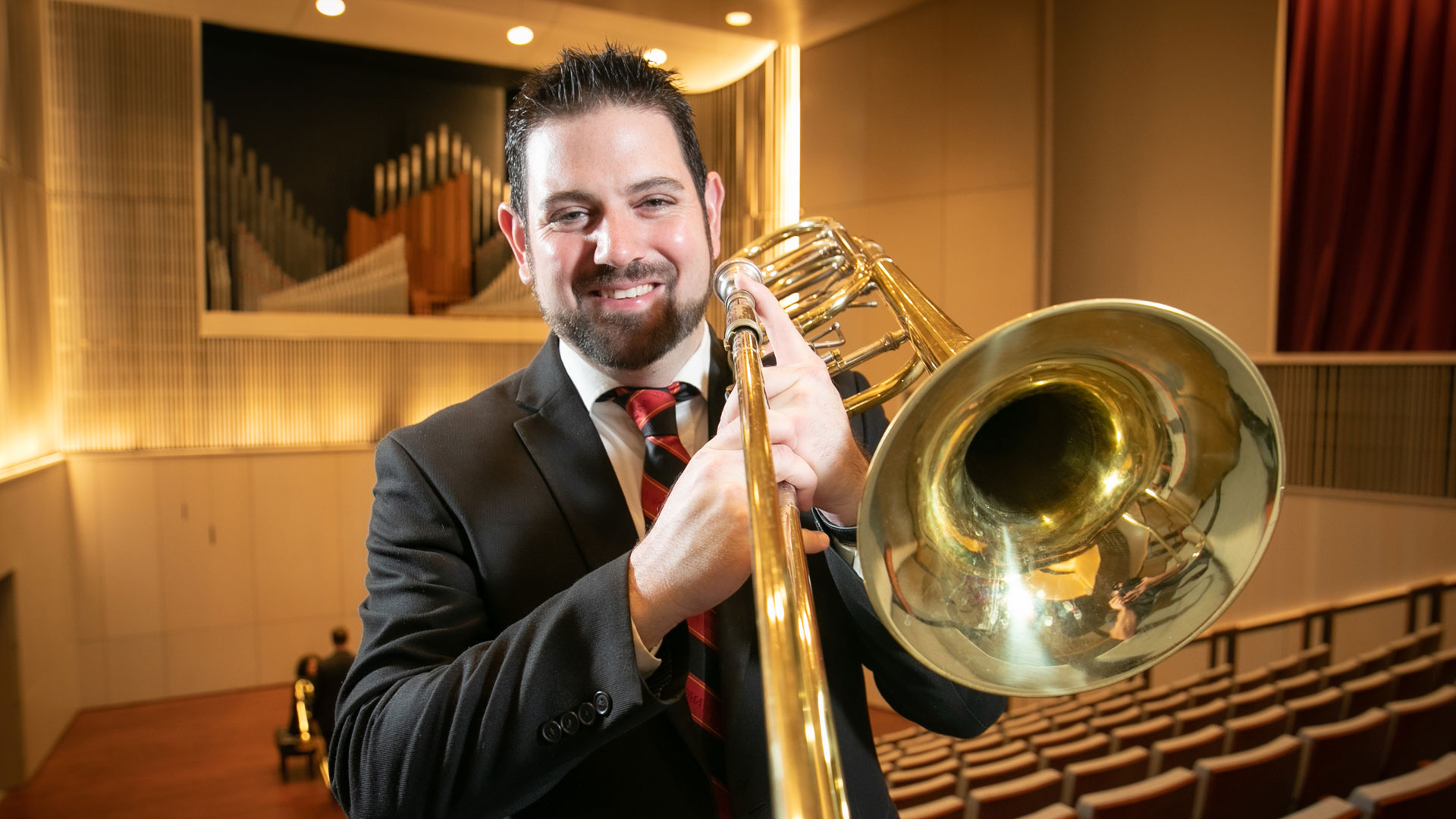 Which would cause you less stage fright: talking in front of a virtually empty auditorium or performing to a packed house?

Dr. Jason Hausback, associate professor of music at Missouri State University, was diagnosed with social anxiety disorder in high school. But after learning to manage it, he finds performance empowering.

“I’d rather play a trombone recital for 1,000 people than speak in front of three,” Hausback said.

He was introduced to the trombone in the fourth grade. He liked the kinesthetic feel of the slide and has stuck with it ever since.

“I play melodies by ear in all 12 keys,” Hausback said. “The focus of attention is crucial in performance – both in terms of being a better artist, but also in terms of managing anxiety.” 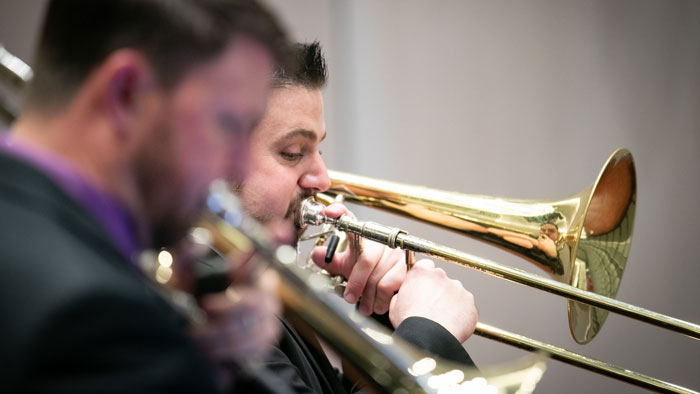 He has performed in many high-stakes situations. He’s performed with a group on a Grammy-nominated album. He’s been selected to play alongside living legends in the International Trombone Festival.

And since coming to Missouri State, he’s performed 35 recitals around the country with pianists and other musicians.

“Performance is like creating a sculpture,” Hausback said. “Once it’s there, you can’t take it back or improve it.”

He likens it to Olympians training for the games: Despite intense preparation, perfection isn’t guaranteed.

“You spend hundreds or thousands of hours trying to be precise,” he said.

But every time you are on stage, there’s an element of uncertainty. On top of that, you never know how the audience will react.

One of the most enjoyable parts of his career is the ability to play with other talented musicians. In February 2019, he completed a tour of recitals along the Missouri River with Dr. Nataliya Sukhina, a pianist from Texas Tech. It was the second time he and Sukhina toured with the recital, Darkness and Light.

“The musical selections were all about characterizing how music depicts darkness and light in the western world over time,” he said.

Dr. Justin Cook, a colleague from University of Central Arkansas, also invited Hausback to perform on his new album, “Connections.” They toured the southeast U.S. in September 2019, performing several recitals. 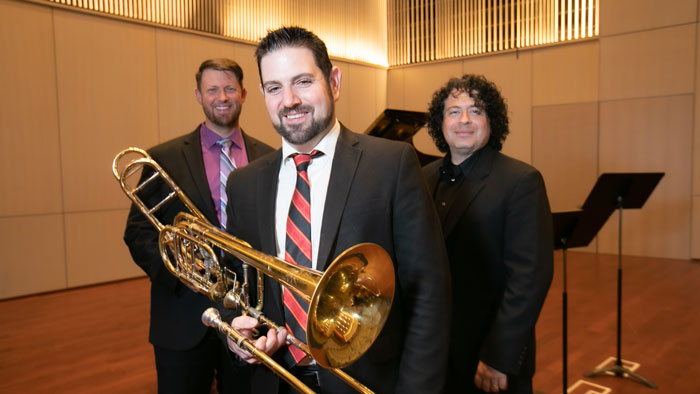 “One thing that sets Jason apart is his background in jazz combined with his interest in classical music,” Cook said. “The result is jazz that’s maybe more lyrical than some other artists and classical that has a bit more of a groove.”

Hausback says his recitals are often like a buffet. Instead of playing the entirety of each song, he may play single movements from multiple songs. This gives the audience more variety and appeals to the casual classical listener, he adds.

Recitals give him an opportunity to teach as a guest artist on other campuses, Hausback noted. His students also benefit from being taught new methods by visiting artists who perform at Missouri State.

He loves the balance between teaching and performing – he pursued academia since he wanted to do both. He teaches individual trombone lessons to students who plan to one day become teachers themselves.

Often I play with people I went to college with. We have that experience of performing together before we got our college professorship gigs.

“It’s more than being a technically proficient trombone player. It’s about becoming a better musician and expanding that to being a better teacher,” Hausback said.

He uses recitals to introduce students to new or influential music, and hopefully inspire the audience. But sometimes, it can have the opposite effect, Hausback notes.

“In a world of curated, beautiful, aesthetically perfect content on social media, people are becoming more perfectionistic,” he said. “When my students hear a musician who plays a ‘perfect’ performance, some think ‘I can’t do that, so I might as well give up.’”

But Hausback encourages them, “facing your insecurities and encountering failure is how you learn.”

Take a look at the jazz studies program