Seeing the forest and the trees

Visualize a tree. It grows larger over time. If surrounded by many other large trees, the branches will slowly converge.

This reduces the amount of sunlight hitting the ground.

If left in such a condition for too long without disturbance, important tree species cannot regenerate. Invasive or shade tolerant species creep in and animals leave the area, in search of better food.

Or maybe the trees simply age, produce less fruit and continue to weaken. These scenarios drive the forestry field and forest management decisions.

He explains that it comes down to planning for ecological succession. This entails designing the future of the forest and predicting what it will be under specific conditions.

With a father and brother both in forestry, Goerndt learned about forestry since he was a young boy. He’s a self-proclaimed “math goon.” This led him to specialize in forest biometrics focusing on measurements and data analysis for forests.

“Everyone should have a better understanding of statistics. We use it constantly. Most people are using it daily and don’t even think about it. They talk about how many miles per gallon their car gets. That’s stats.” – Dr. William McClain

This now incorporates the latest technology, such as remote sensing, satellites, drones and spectral imagery. Using these tools, he collects data from forest landscapes with help from geospatial science experts, like Dr. Toby Dogwiler.

A drone hovering over the tree canopy may reveal beautiful aerial imagery of the forest. But it also puts into focus the challenges that lay beneath.

“Technology gives us the opportunity to get data for very large areas more efficiently than we ever could with boots on the ground,” Goerndt said. “That’s where the science of forestry is headed. As our ecological challenges mount, we must look to the trees as a critical component for addressing landscape degradation, pollution, climate change and alternative fuels.” 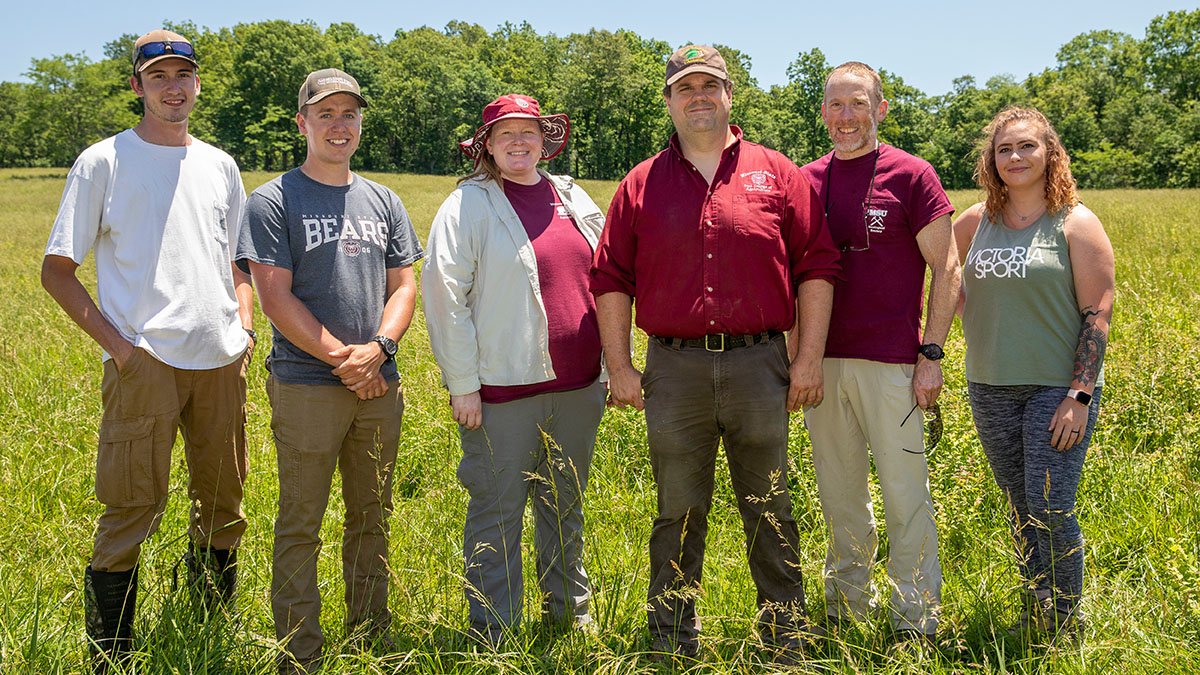 Goerndt has grown the curriculum for forestry at Missouri State, and published more than 15 articles in the last 10 years. Many of these publications have come from his research assessing potential biomass availability in forestlands.

Now he’s working on a collaborative study, funded by the National Institute of Food and Agriculture with Dogwiler, Dr. William McClain, Dr. Melissa Bledsoe and two graduate students. The study will showcase exactly how much more productive an area of land can be if managed for multiple crops and products.

“I’m proud of the fact that we made it work that two students are going to get their degrees out of the project.” – Dr.William McClain

“We’re creating the capacity here to do years and years of long-term research,” he said. 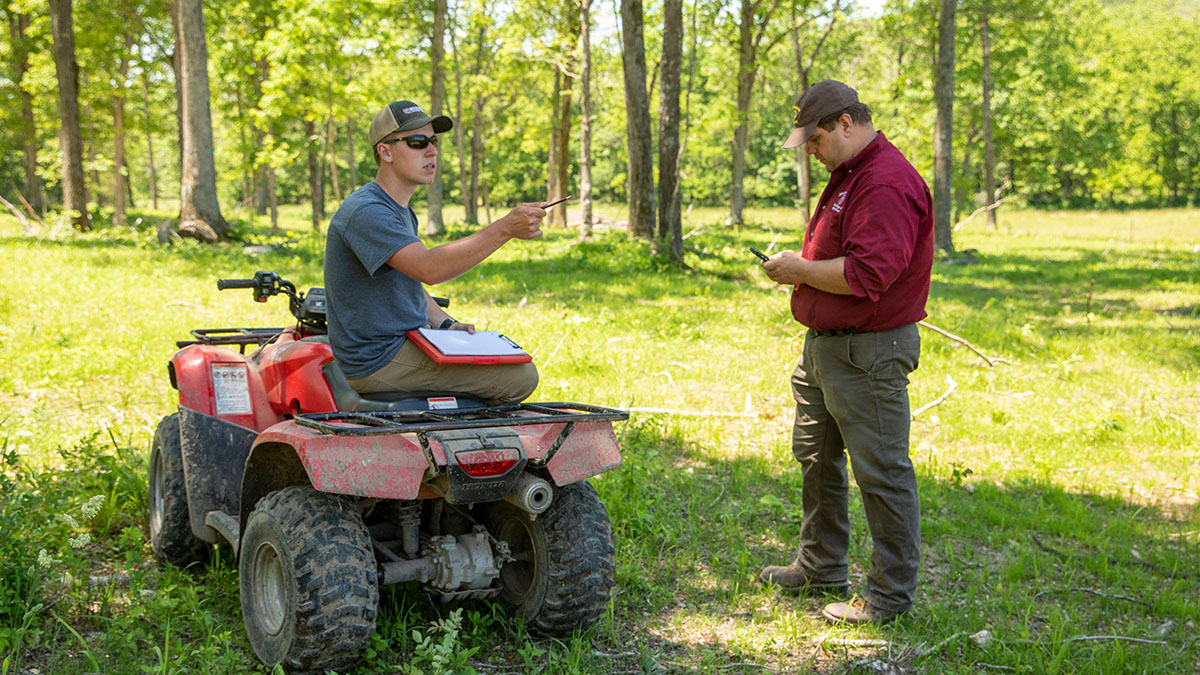 There’s a control site of about five acres comprised of tall fescue. A second five-acre site of natural mixed hardwood forest has been thinned down to simulate a savannah. The third plot, about five acres, will be a site of a walnut plantation for research and future collaboration with Hammons Black Walnuts.

Using these sites, the team will compare cool-season and warm-season forage growth. They will investigate the synergistic relationships between trees and forage. They will also assess the economic and ecological benefits of intentionally converting either fields or forests into silvopasture land, which means managing land to integrate trees with livestock grazing.

“The silvopasture project is right for in the Ozarks because we’ve got a vast amount of two things: trees and cows.” – Dr. Michael Goerndt

On all of his projects, though, Goerndt wants to bring it down to earth and show the practical application.

“In a nutshell, I always want the takeaway to answer one question: ‘How can the real stakeholders apply this in their lives?’” Goerndt said. 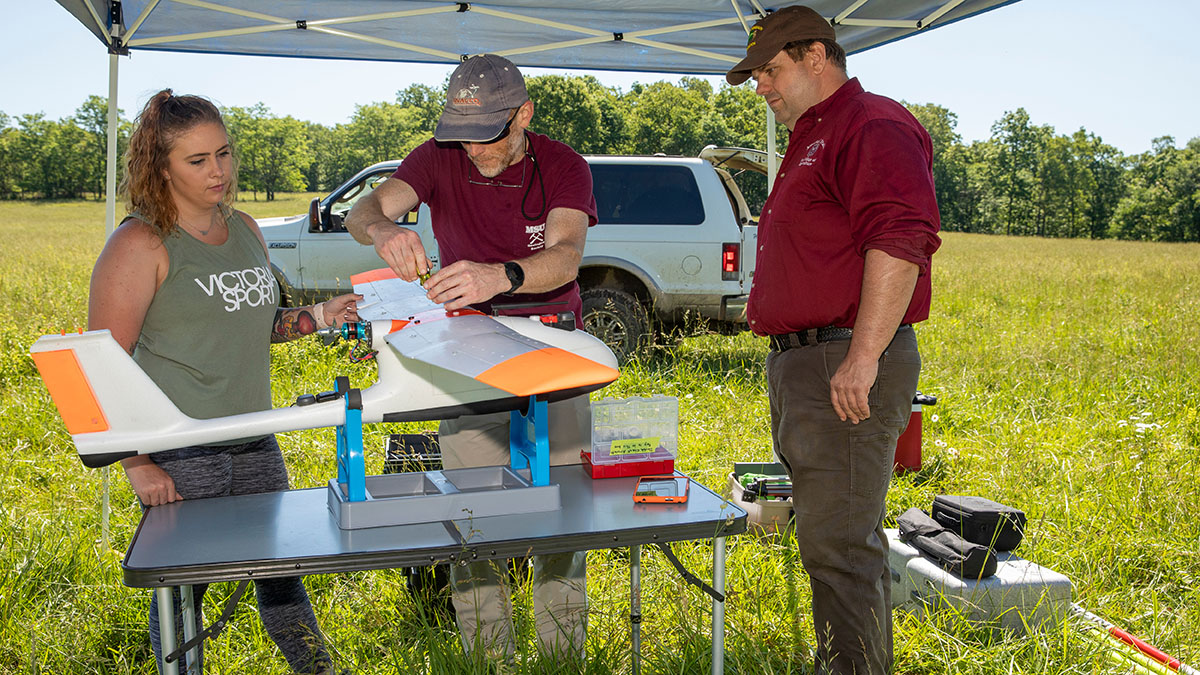 Through a sustainability lens, Goerndt’s work is very valuable. In addition to identifying sites with the greatest potential for renewable energy sources, he advocates for greater biodiversity.

Rather than continuously simplifying the landscape and allowing one species to dominate a forest, his research brings to light how different species can coexist in a mutually beneficial relationship.

“Foresters know in most cases we are never going to see the full fruits of our labors within our lifetime. The rotation is too long.” – Dr. Michael Goerndt

Biodiversity also builds in safeguards for the agriculture industry.

“If you build a plantation with one cultivar of a crop, you open yourself up to potential devastation,” Goerndt said. “What happens if a fungal disease comes along and wipes out that particular variety? You’re done.”