Go with the flow

The associate professor of biology at Missouri State University makes his research and teaching understandable by comparing scientific processes to items you probably have lying around your house. A garden hose. Bottles of perfume. A paper towel roll.

It’s all in the name of working toward a solution that could save people who are born with congenital heart and vascular conditions. He has a simple central research question: How does the cardiovascular system form to begin with?

Congenital heart defects affect about 40,000 births every year in the United States, according to the Centers for Disease Control and Prevention (CDC), and congenital vascular anomalies affect nearly 1% of all births.

“If we understand the rules of how to build a blood vessel,” Udan said, “we could repair or even build vessels outside of the body.”

An expert in the field of cardiovascular development, Udan has published 20 articles and presented 25 times on the topic. 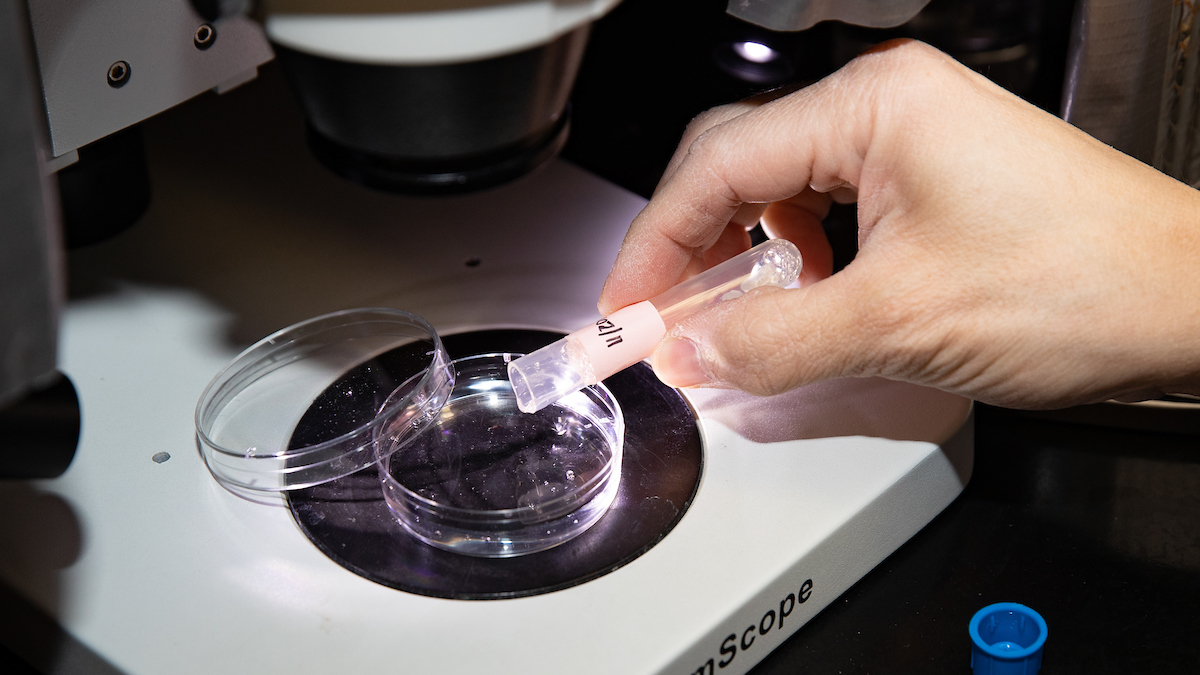 In Dr. Ryan Udan’s biology lab, he and his students research how blood vessels form.

Researchers know some about how the cardiovascular system develops in humans. The process starts as single cells connect to each other and form tubes. Then those tubes can connect to other tubes or branch out to form new tubes. But researchers don’t know everything.

“A scientist probably wouldn’t ever say ‘magic’ because there’s a reason for it. But yeah. Blood vessels are kind of magical.”

That’s why Udan and his team of student researchers are experimenting with embryos from several organisms, including zebrafish and mice. Drugs and substances can change the cardiovascular development of a mouse embryo, which provides useful information that translates to human beings.

Of particular interest: How do blood vessels close to the heart accommodate more blood flow than capillaries farther away?

First, vessels closer to the heart must get bigger in size. “They actually somehow magically come together and form a bigger vessel,” Udan said.

Second, the tissue that makes up these large blood vessels has to become thicker than capillary tissue.

“I think of it like a paper towel roll. The inner lining of the vessel is like the cardboard tube, and a bunch of paper towels that surround it are the extra layers of smooth muscle cells,” he said. 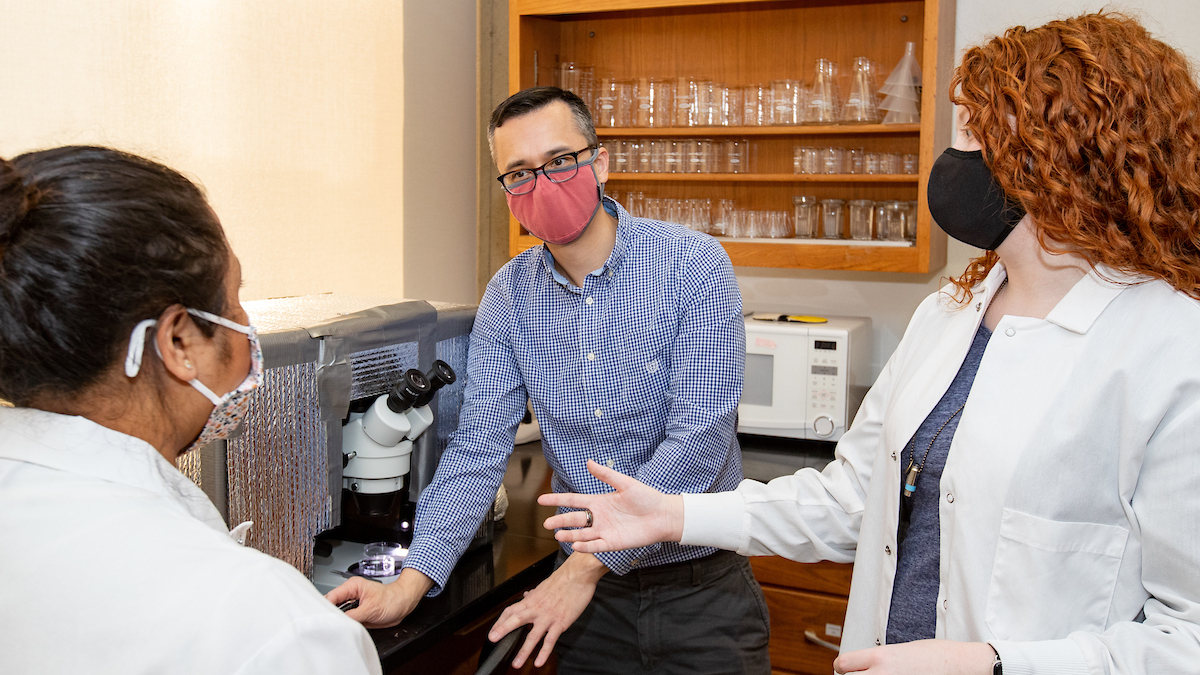 Udan knows that blood flow creates a mechanical force to tell certain vessels to get bigger and to form a thicker tissue. Udan compares the process to using a garden hose.

“When you turn on a hose, there’s pressure,” he said. “If you turn on the nozzle, water flows because there’s friction from the water against the wall of the hose.

“The same thing happens with these blood vessels. They get this mechanical force. That force turns on the genes, so they change themselves.”

Udan doesn’t know exactly how or why those cells decide to surround the larger vessel. But thanks to a $415,000 AREA grant from the National Heart, Lung and Blood Institute, he will be able to conduct more research in that area.

“An embryo starts as a single cell. After a period of time, suddenly you see blood, you see a heart and that heart connects to those blood vessels.”

The hypothesis? High-force vessels send a chemical signal to tell smooth muscle cells to come over to that location.

“Imagine you walked into a room and somebody opened a bottle of perfume,” Udan said. “Even if you had a blindfold on, you’d probably be able to smell around until you found where the bottle is.

“We think those high-flow blood vessels are sending out molecules, which the smooth muscle cells sense, and move there. There’s a whole other thing we’re trying to study in terms of how it knows to attach to that vessel.” 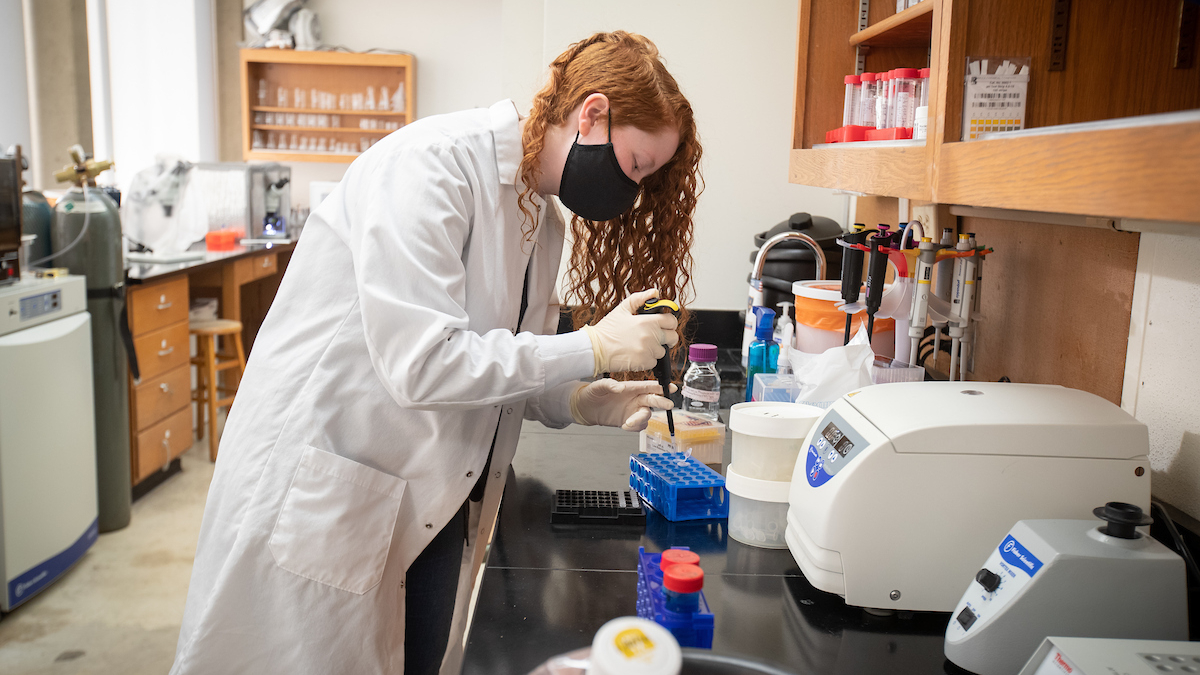 Rachel Padget graduated from Missouri State in 2017 with a master’s in biology. She’s now pursuing a Ph.D. in translational biology, medicine and health at Virginia Tech and said she appreciated how much Udan cares about his students.

“Some of the techniques we used for our projects were very precise and delicate, and he was always patient with us and kind to us,” Padget said.

Udan stresses that lab time with the students is invaluable: “I really feel like I try to give them a comprehensive training experience.”

Get a biology degree

With a childhood filled with rich cultural experiences like participating in powwows, a career in cultural anthropology was Dr. William Meadows’ childhood dream. From the age of 4, he wanted to interview people and go on archaeology digs to uncover the past all around him.

From a military family, early in his career he became interested with the military experience of indigenous peoples.

As he unearthed more about the ceremonies, music and art associated with these veterans, he discovered a largely unstudied area of history: code talkers from many Native American tribes. While the Navajo were well-known, over 30 other groups were not.

“I stumbled upon it myself,” Meadows said.

He was interviewing a Comanche World War II veteran, then in his 70s, when the man mentioned he served as a code talker.

“With the reality of mortality, I knew they wouldn’t be around to share their stories much longer,” Meadows said. “I dug in immediately interviewing all of the guys.” 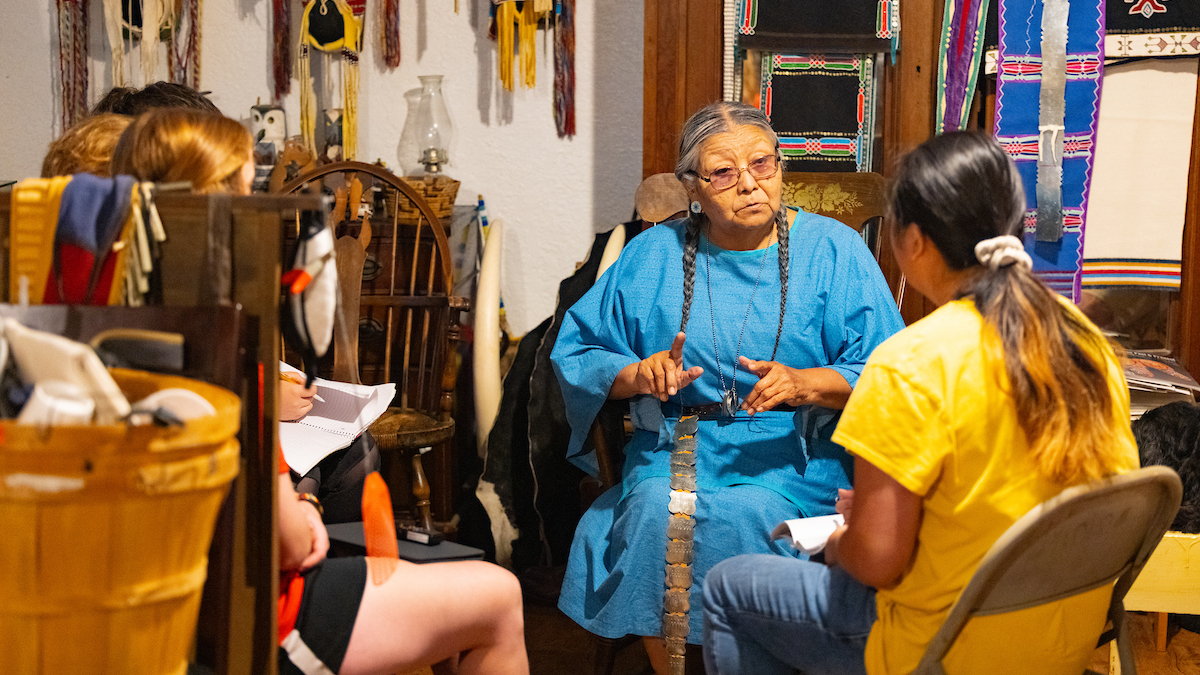 As part of an ethnographic field school, students interview Vanessa Jennings of the Kiowa tribe.

This tenacity to uncover more and the humility to pivot directions to preserve important cultural experiences earned Meadows respect from many tribes, according to Vanessa Jennings. She is a Kiowa U.S. National Heritage Fellow.

“It is amazing to watch him record and document ancient information from these elders,” Jennings said. “Each bit is more information for the unborn generations to learn of our beautiful Kiowa culture.” 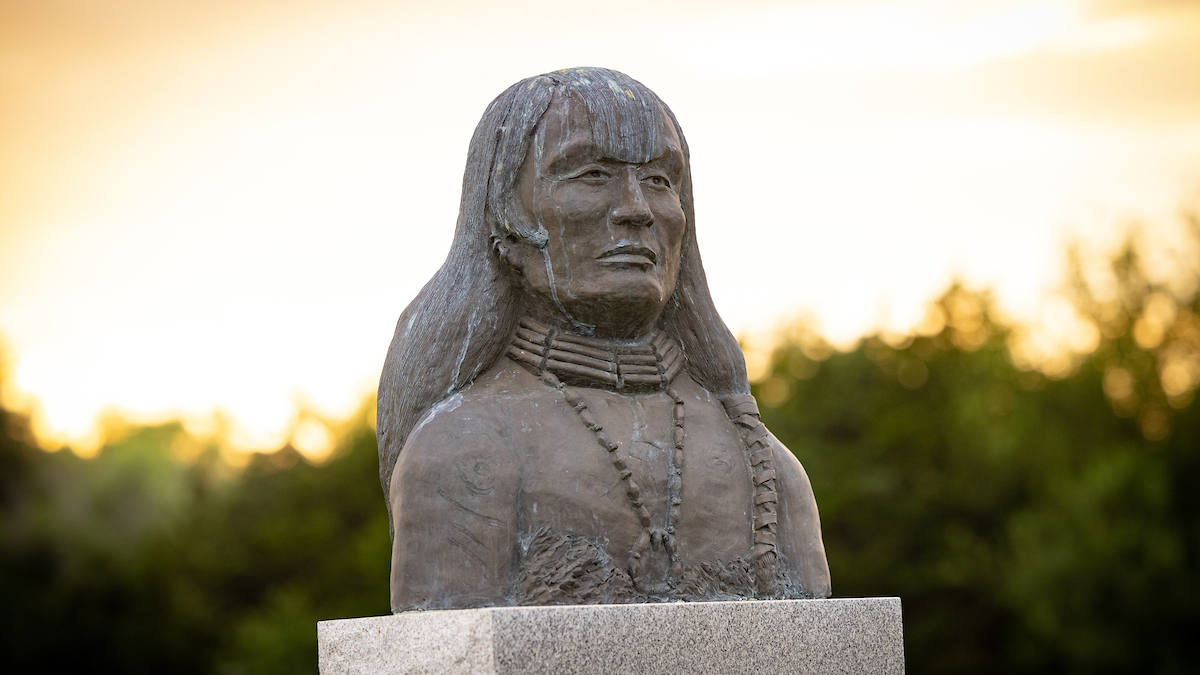 Much of what the general public knows about the code talkers’ contributions to military action has only been exposed in the last 20 years. This coincides with Meadows’ publications and the production of the film “Wind Talkers.”

“A lot of them had blessing ceremonies done before they left. Some carried traditional medicines into combat. They’ve shared the songs that were sung for them.”

In fact, Meadows testified before Congress in 2004. This contributed to the passage of the 2008 Native American Code Talkers Act. This act awarded congressional medals for all code talkers of both world wars.

Lobbyists distributed Meadows’ books to senators and representatives to educate and persuade them to provide recognition for other tribes. After hearing sufficient evidence, Congress can honor other groups in the future under the same act.

“The code talkers never went looking for this recognition,” it was their tribes, relatives, scholars and others, Meadows said.

After recently completing a book on WW I code talkers, he is working on a WW II volume.

With his deep roots in these tribal communities, he continues to receive tips. He hopes to identify and facilitate recognition for all tribes that participated – to make sure they are not obscured from history.

“Code talking allowed you to provide commands and plans on the open airwaves,” Meadows said. “Anybody could listen to it. But it was pretty much unbreakable.”

The languages were largely unknown, not written down and non-European based, he added.

No matter which process was used, it saved hours of encoding and decoding. And in war time, hours saved lives.

None of the Native American codes were ever broken.

Meadows evaluates more than how the tribes communicated. He also explores the ceremonies, myths, stereotypes and racism they experienced.

One of the most common myths was that all code talkers were sworn to secrecy. While the Navajo were, Meadows says dozens of newspaper articles widely shared information about other groups.

“I’m a collector and facilitator of information.”

Many today believe the code talkers weren’t U.S. citizens when they volunteered or were drafted in WW I. However, Meadows discovered that about two-thirds were.

He’s also been able to dispel the myth that all Native Americans in the world wars served as code talkers. Instead, they filled many ranks. Unfortunately, many had to confront the stereotype of the “super scout.”

“They were put in very dangerous positions and often told to take the lead. It was assumed they could run without making a sound and see better at night,” he said.

In the Pacific Theater of World War II, code talkers were treated well and even admired in their units. However, some were mistaken as Japanese and captured by other U.S. troops when not with white soldiers.

“Without the internet, travel and cultural awareness we have today, American Indians, Chinese, Korean, Filipino and even some Hispanics were confused as Japanese.” In the Pacific during WW II, “almost anybody that didn’t look European was confused as Japanese,” Meadows said.

All were eventually identified and released. Some had bodyguards assigned to prevent misidentification. 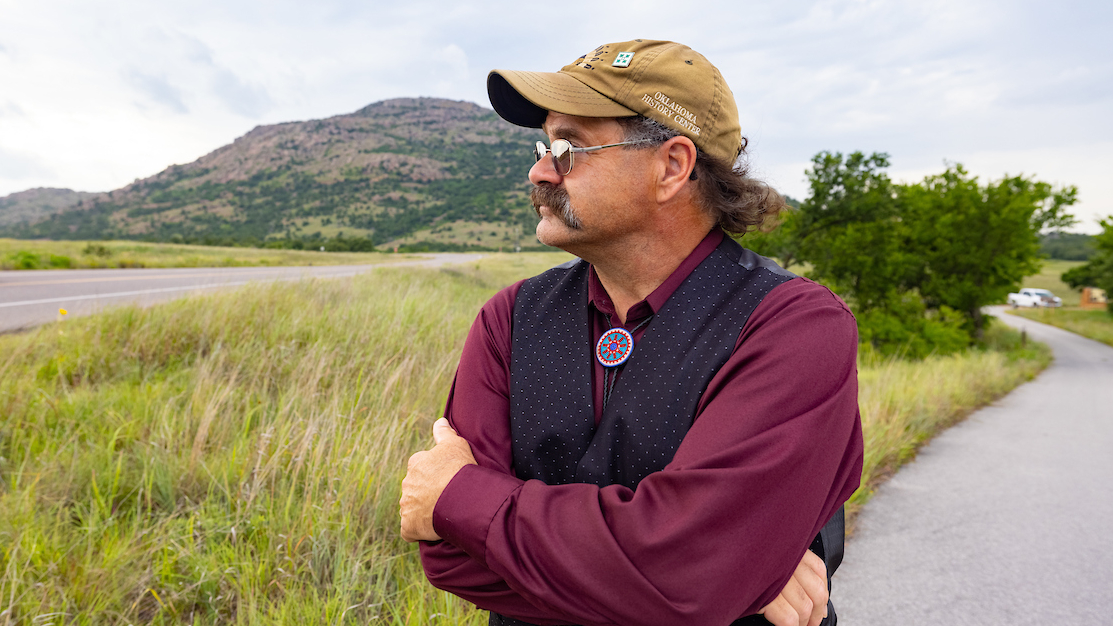 “Dr. Meadows has provided both the Indian and non-Indian worlds with a small piece of written history that was only known through oral stories,” Lanny Asepermy said.

Asepermy is Comanche, a retired Master-Sergeant of the U.S. Army and Vietnam veteran. He has known Meadows for 20 years.

For him, the relationships and the cultural recognition make the job as worthwhile as the day he started.

“The Comanches gave me a Pendleton (Grateful Nation) blanket, which has stripes of all the military campaigns,” he said. “They said, ‘We have never given one of these blankets to a non-veteran. You’re the first and you’ll probably be the only one.’”