You might think it unlikely that a country that evolved from several warring kingdoms and endured three European occupations and a long civil war during its history would also be home to one of the oldest continuous Buddhist traditions on the planet.

But it is. And that’s one of the things that attracted Buddhist studies scholar Dr. Stephen Berkwitz to Sri Lanka in the first place.

Although Berkwitz, professor of religious studies and current department head, originally hails from Minnesota, he has long harbored an interest in Asia.

“I became interested in studying Buddhism, particularly Buddhism in Sri Lanka, which has a very long history,” he said.

“I chose Sri Lanka as a location for my research because it continues to house a living Buddhist culture and the language that is spoken there is more closely related to the ancient Indian languages I was studying in graduate school.” 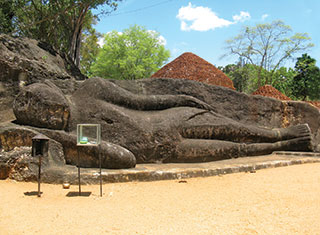 This reclining Buddha is at a temple in Sri Lanka. It had been neglected and even damaged before steps were taken in recent years to renovate the archaeological site. Photo by Stephen Berkwitz.

Instead of focusing on the arguably more familiar Zen or Tibetan traditions, Berkwitz was drawn to Theravada Buddhism. “I was and remain interested in Theravada Buddhism, which does have a very long history and a more conservative orientation,” he said. “That combination I find intriguing – that commitment to preserving an ideal against pressures to change. Sri Lanka is particularly dedicated toward that preservation ethos. Its close connection to India also gives it a distinctive development compared to other forms of Buddhism.”

Unlike many Buddhist studies scholars, however, Berkwitz has chosen to focus on literary efforts beyond the canonical. “My research has been focused on Sri Lankan Buddhist history and literature primarily,” he said. “One thing that probably characterizes my work and interests is to go outside of a strictly monastic setting and look at how the Buddhist religion was expressed and practiced in the wider society.”

An example is his recently published book, “Buddhist Poetry and Colonialism: Alagiyavanna and the Portuguese in Sri Lanka,” which explores the tumultuous change one poet experienced as Sri Lanka was colonized by the Portuguese. The verses of poetry translated in the book provide a window into the tremendous religious and cultural transformations of the early 17th century, when Europeans and Asian Buddhists sustained and intensified exchanges.

Berkwitz began the research for this book in 2005, attained a Fulbright scholarship to continue the research, learned to read Sinhala poetry and the Portuguese languages and spent seven months in Sri Lanka. 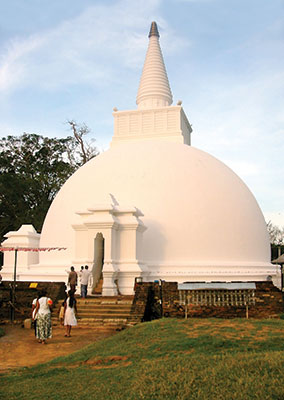 This is Somawathiya Chaitya, a “stupa” (domed Buddhist structure). It is located within Somawathiya National Park. Tradition holds that it was built in the second century BCE to enshrine a relic of the tooth of the Buddha. Photo by Stephen Berkwitz.

He also received a Visiting Research Fellowship to Ruhr-Universität Bochum in Germany in 2011-12. During that time, he made several research trips to Portugal to study the colonizer’s views of Buddhism.

During his fellowship in Germany, Berkwitz further explored the Portuguese encounter with Buddhism in Asia. “There is a large German government-funded project, ‘Dynamics on the History of Religion between Asia and Europe,’” he said. “I was among about a dozen international Fellows invited to do research, with my focus being the encounter between the Portuguese and Asian Buddhist in the 16th and 17th centuries.”

Indeed, there are only a handful of scholars in the world who focus on the areas Berkwitz studies, but that doesn’t diminish the growing importance of his work.

“It’s a small number, but it’s timely because there is a great deal of interest in the humanities in general to look at the history of cultural encounters,” Berkwitz said. “By looking at these encounters, scholars are seeing potential for understanding the role these exchanges had for shaping the development of people and places in the modern world.”