When Dr. Julie Masterson noticed her then second-grade son was having difficulty learning to spell some 20 years ago, she approached his teacher and inquired about ways to help him improve his skills. His teacher replied with a simple “Oh that’s normal. He’ll learn.” She took the instructor’s word for it and dropped the subject.

During his third grade year, Masterson noticed her son was still having a hard time making his marks on his spelling tests despite extra study time. Again, she spoke with his teacher and received the same response as the teacher from the year before: “Oh that’s normal. He’ll learn.”

Masterson refused to accept the idea that individuals could not improve a skill.

She dropped the subject for a second time and continued to help him study at home. As he later progressed in the fourth grade, his teacher noted his poor spelling skills but said that nothing could be done about it because, “people are either good at spelling or they aren’t.”  As a speech-language pathologist, Masterson refused to accept the idea that individuals could not improve a skill. She had indeed observed her son’s struggle to spell words, but she had also spotted something else: He was a very strong reader despite his poor spelling skills.

Why was this? This question motivated Masterson for the next 20 years as she researched literacy development in young children. Her findings suggested that the way in which we teach our children to spell may be wrong.

What is spelling awareness?

“How were we taught to spell? Most of us were given a list of words on Monday that we had to study at home, memorize really, throughout the week and then we took a test on Friday,” said Masterson. “What we’ve initially found in our research is that spelling isn’t dependent on memorizing. It may work for the Friday test, but kids will go back to spelling the words the way they did after that.”

Masterson found that in order to learn how to spell, you need three things: sound awareness, meaning awareness and spelling pattern awareness.

Using the word “burned” as an example, the reader must know that “burned” has four sounds, and this is sound awareness. They must also know that “ur” sound can be spelled a variety of ways, such as “-er” or “-ur,” and this is spelling pattern awareness. But what about meaning awareness?

“How were we taught to spell? Most of us were given a list of words on Monday that we had to study at home, memorize really, throughout the week and then we took a test on Friday.” — Dr. Julie Masterson

“When you hear the word ‘burned’ the last two sounds in that word are the ‘n” and the ‘d’ sounds,” said Masterson. “Well because you know that the word refers to an event that occurred in the past, you know not to just end that word with a ‘d;’ you know to spell it with an ‘-ed.’”

After readers have successfully mastered all three features of spelling a word or set of words, they must develop automaticity. Automaticity is the ability to know how a word is spelled without having to go through its three features. It involves having clear “mental pictures” of words and allows a reader to instantly recognize a word or a writer to automatically spell a word. 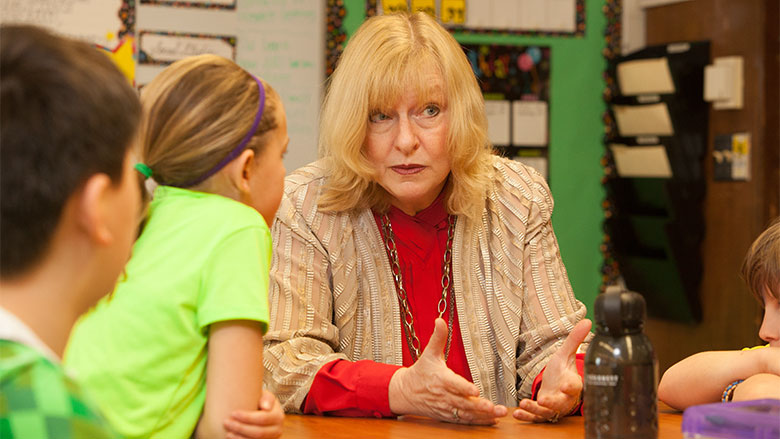 Improving both spelling and reading

In order to define exactly what it is kids need to learn and how best to teach them, Masterson designed tailored interventions based on how children spell various types of words. She and her collaborators (including many MSU students) developed software to analyze spellings and indicate goals and methods for treatment as well as a metric to monitor student progress. The team conducted treatment studies and found that the children’s spelling did get better, but their reading improved to an even greater extent. Improvement in reading is particularly important in an era of school accountability.

With this metric, they’ve been able to do several group comparisons on children from various backgrounds, including kids of aboriginal descent in Australia and those who are African American versus not African American. They also tested children who were living with certain conditions like speech disorders or deafness.

“People would have assumed that if you were deaf for a number of years, your spelling errors would be primarily due to a lack of awareness of sounds because you weren’t hearing them…Yes, some of them were, but a lot of them were just like errors in people who are hearing yet have failed to learn the necessary spelling features. The good news is that our tailored treatment can be used to help them learn what they need to learn.” 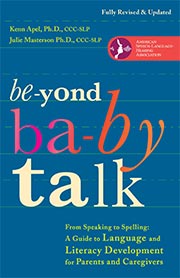 The three spelling features and more are discussed in Masterson’s newly-revised book “Beyond Baby Talk: From Speaking to Spelling: a Guide to Language and Literacy Development for Parents and Caregivers.” Co-authored with Dr. Kenn Apel and sponsored by the American Speech-Language-Hearing Association (ASHA), the book provides parents with the resources necessary to properly monitor their child’s development from infant to the third grade. Masterson had no intention of writing a book, but when she was approached by the executive director of ASHA she quickly saw the topic’s potential for a wider audience. Her expertise on the subject and second edition of the book led to her being featured in articles for NBC’s “Today Show” about how to tell the difference between normal developmental variation and potential disorders, gender differences in language development, and how to teach young children to be kind.