Music and storytelling have long been intertwined with one another. From Pyotr Ilyich Tchaikovsky’s famous score that underlies the ballet performance of The Nutcracker to the trope of using Nikolai Rimsky-Korsakov’s “Flight of the Bumblebee” in a film to create a sense of urgency or danger. But, while classical music has proven to be a powerful force in our culture, it’s struggled to find its place in younger generations.

Too often the only encounters children have with music and musical instruments is a brief class visit from a musician. Unless they take up the hobby themselves, their only opportunity to establish a connection with music is a watching a visiting flutist play a scale during a special class demonstration, or, if they’re lucky, be able to pluck the string of a violin. Dr. Daniel Ketter, cellist and assistant professor of music, explained that more and more people are quick to write off contemporary classical music as out of touch, difficult to play, and paling in comparison to the classical musicians like Bach and Beethoven. He and Dr. Emlyn Johnson, an instructor of music and flutist, have taken on the task of changing people’s minds.

Last year, they came upon the opportunity to work with composer Daniel Pesca to commission a piece inspired by the children’s book “Pezzettino” by Leo Lionni. 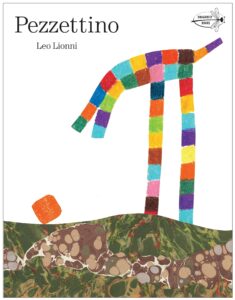 “We have a long-standing interest in performing contemporary music, supporting contemporary composers, and advocating for their work,” Ketter says. Beside him, Johnson emphasizes how their new project is “a dream becoming reality.”

The composition is written to highlight the cello and flute. While the story is being read aloud, the two musicians will accompany the story line. This challenges Ketter and Johnson to play a versatile range of emotions on their instruments. They want to show their audiences that music can be strong, it can be timid, it can be calming, or it can create a sense of danger. It all just depends on how it is written and performed. They want to change the way kids, and maybe even their parents too, think about classical music and how they engage with it.

“We hear new music all the time in movies and TV shows,” Johnson says. “We’re always surrounded by new music but when we think about sitting down for a performance for contemporary music that’s a different feeling for most audiences. So, it is exciting for us to be able to make a very friendly introduction.”

But why children’s literature?

Ketter insists that what he and Johnson are doing isn’t new. He points out George Lucas’ use of music in the Star Wars franchise, how it’s birthed recognizable tunes like “Leia’s Theme” and, of course, “The Imperial March.” Johnson chimes in with Peter and the Wolf, a classic music composition that has been adapted numerous times into books, films, and theatrical performances.

“There is a long history of using music in opera or in movies to help to tell stories that really, as multimedia elements, the story makes people be able to connect with the music more,” Ketter explains.

“The Pezzettino story is about being yourself,” adds Johnson. Throughout the book, the little shape the readers follow, meets different characters with new colors and distinct personalities and this lends itself well to showing the different styles of music that can be performed, so a listener can associate it with different emotions or concepts.

Ketter and Johnson hope that they’ll have the opportunity to take the live performance into schools and encouraging kids to think about what makes them unique like the book does, with potential to incorporate the performance into lesson plans and curriculum focusing on themes of identity.

“We’re hoping to also share our passion for doing this kind of work and encourage other musicians to also think about creating this kind of work too; to access different audiences, to introduce younger audiences to music. In a different way than just saying ‘this is what a flute looks like, this is what a flute sounds like.’ [Instead] here is a story, here is a message, here are other topics we can talk about with it,” explains Johnson.

The two musicians are set to perform the piece on October 23 at 12 p.m. at Pagination Bookshop and another composition is already underway. Kim Osberg has begun work on adapting “My Father’s Dragon,” by Ruth Stiles Gannett, into a piece. A video recording of the composition will also be available starting September 21, made in collaboration with Darcy Stevens, a recording arts editor, and recent film graduate student, Chris Gawat, and includes animation.