In July 2016, Jerry Hoover, music professor and director of bands, will retire after more than 30 years at Missouri State. 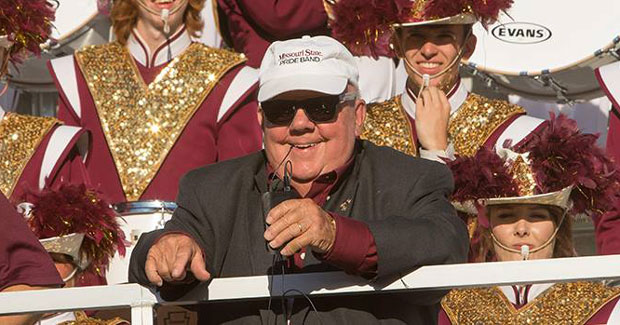 Saying farewell to a band era

Hoover joined the university in 1985 and started the Pride Band program. In March, Hoover told “The Standard,” MSU’s student-run newspaper, that he estimates he’s taught more than 4,000 students in that time.

Hoover has seen the program evolve from the 16 students he brought with him to MSU from New Mexico State University, to the 18 student bands it has today. According to his MSU profile, Hoover directs the Jazz Band, Symphonic Band, Varsity Band, several entertainment ensembles and the 320-member Pride Marching Band.

There will be two receptions to honor Hoover’s contributions to MSU.

The music department will host a retirement reception for Hoover after the April 26 All Bands Concert at Juanita K. Hammons Hall for the Performing Arts on the fifth floor mezzanine. The concert will begin at 7:30 p.m., with reception to follow.

On May 10, the Missouri State University Foundation will host a reception and dinner to help support the Jerry Hoover Band Endowment. Register for the event and make donations to the fund on the Foundation’s website. If received by April 29, your gift will be included in the evening’s program.