Many of the favorite choral works of Webb will be performed, and alumni will be coming in from across the country to celebrate his life and legacy at Missouri State. The concert will be full of music, followed by a reception, where many wonderful stories are surely to be shared!

Please join us for this special event and spread the word to others who might be interested. This event is free and open to the public. 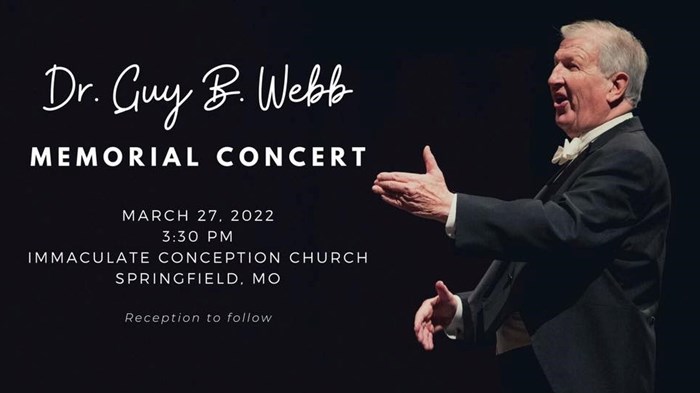 He had a diploma in voice from Juilliard, bachelor’s and master’s music degrees from the Columbia University Teachers College, and a doctorate in the musical arts from the University of Illinois.

Dr. Cameron LaBarr, current Director of Choral Studies recalled that Webb had a laser-like focus during performances, adding that he was a practical joker with a big laugh. “He just always brought a smile to everyone around him.”

LaBarr said comedic antics only amplified how Webb was able to cast long shadows in the memories of his students. LaBarr added, “He was inspiring. He was mystical, to a certain degree. He was a consummate artist. My big takeaway from him is the sheer pursuit of artistry.”

Webb retired in summer 2014 following a farewell tour to England and Scotland. Missouri State alums Dan and Melissa Scott were able to participate in that tour. Together, they established a scholarship at Missouri State in Webb’s honor.

Memorial donations can be made to the “Dr. Guy B. Webb Touring Scholarship” that has been set up at the Missouri State University Foundation, online or by mail. For more information, call 417-836-4143.