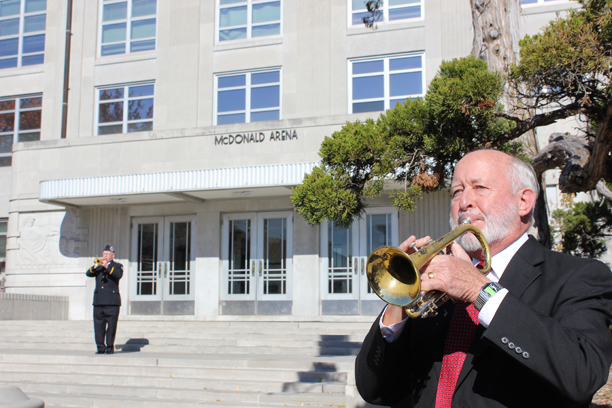 A Musical Salute To Our Veterans Concert

The Jazz Band, entertainment ensembles, dance line and Pride Marching Band will combine forces to present this concert at on Nov. 8 at Juanita K. Hammons Hall for the Performing Arts. Retired U.S. Army Staff Sgt. Travis Mills will be the featured speaker. Mills is a wounded warrior and motivational speaker who lost portions of both arms and legs while on active duty in Afghanistan.

The Missouri State University Pride Band’s trumpet section will be joined by community trumpeters for the annual “Taps Project” on Nov. 11 on the patio between McDonald Arena and the PSU.

Beginning at 10:45 a.m., the Pride Band will assemble on the steps of McDonald Arena to perform the national anthem.

At 11 a.m., 60 trumpeters will disperse to their assigned areas throughout campus to perform “Taps” — the musical piece played during military funerals and flag ceremonies — in a cascading effect.  Each trumpeter takes his cue three notes after the one preceding him.