More about the band

The Missouri State University band began in 1908 with 16 members. It has since enjoyed national and international success with performances at NFL football halftime shows, featured appearances in the Macy’s Thanksgiving Day, Tournament of Roses and Orange Bowl Parades, and unforgettable Bear football halftime performances.

Today, the band features more than 300 musicians, color guard and dance team performers, and many band alums continue to lead and influence marching band programs across the country. 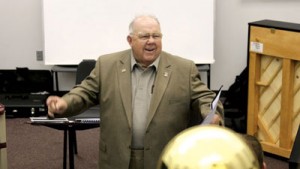 Band director to retire in July

The MSU band program has been led by Jerry Hoover since 1985.

Hoover, who oversees 18 bands, will be retiring in July. According to The Standard, the University’s student-run newspaper, Hoover’s achievements include being inducted into the Missouri Music Educator’s Hall of Fame, and in October 2005, MSU honored Hoover by declaring a “Jerry Hoover Day.”

Tune in to watch documentary on OPT