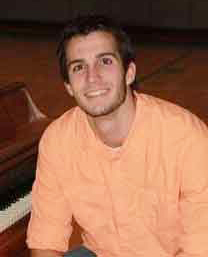 Senior Tyler Durham had never written for wind ensemble before starting his piece, “Flight of the Monarchs.” He is no doubt a talented composer, but he had a lot of catching up to do.

As the Missouri State University Wind Ensemble rehearsed to debut the piece in 2014, Durham studied wind ensemble literature and proper orchestration, as well as the music form’s strengths and limitations.

“It was a lot of work, but it’s always exciting to work on something entirely new and step outside of your comfort zone.”

The hard work paid off. The piece has earned him an elite spot at the Society of Composers, Inc. (SCI) 2015 regional conference in March, an honor shared by few professionals. In fact, he was one of only five to be chosen in this year’s wind ensemble category.

Durham’s talents in classical music are matched in his film scoring, a passion cultivated by the College of Arts and Letters’ pursuit of collaboration.

“It’s just really cool to see the cross between the different departments,” he said. “That’s something I really loved about the program. I’ve had a lot of freedom to work on my own projects, which I feel is extremely important being a creative person in a creative art.”

Durham is majoring in music composition and minoring in recording arts. He has won numerous awards for the score he created as a freshman for media, journalism and film’s web series, “Epilogue.” He is also involved in a few other media projects — accomplishments he hopes will give him the opportunity to join composers like John Williams (“Jaws,” “Star Wars” and “Indiana Jones”) or Hans Zimmer (“Interstellar,” “Inception” and “The Dark Knight”) in the Los Angeles film scene.

“You can literally go anywhere with the music. That fact is both exhilarating and unbelievably daunting.”