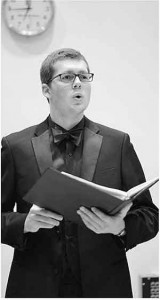 Jared Swope, a senior in the music department, has been awarded a spot to study and perform with the Grammy-nominated Tallis Scholars, a preeminent a cappella vocal ensemble.

Swope is among 30 young professional choral singers chosen for this esteemed fellowship, which will take place April 13-17 at Carnegie Hall’s Weill Music Institute in New York City. All travel expenses for the fellows are covered by Carnegie Hall.

The fellows will join Tallis for the culminating performance April 17 at New York City’s Church of St. Ignatius Loyola. Together, they will perform Tallis’ 40-voice motet and other Renaissance masterworks as part of Carnegie Hall’s Before Bach focus.

Swope is a double major in music performance, with a vocal performance track, and music education. He said he plans to pursue professional singing after completing his degrees at Missouri State University.