Walk by Missouri State’s Meyer Library on any given Tuesday at noon and you may notice carillon bells filling the air with anything from traditional songs to contemporary music.

The carillon originated in the Low Countries of Belgium and the Netherlands. It has become common there; in Amsterdam alone, there are five carillons.

The United States has a collection of 185 carillons, just two of which are in Missouri — one in St. Louis and the other here at Missouri State. 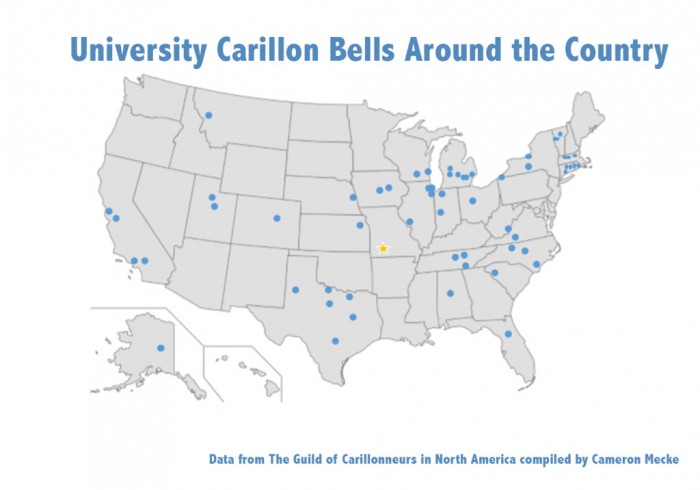 The man behind the bells

While many people enjoy the music produced by the carillon, few know that the bells are being played by Jeremy Chesman, associate professor of music and local carillonist.

Chesman earned bachelor’s and master’s degrees from the University of Michigan and then spent six months studying in Belgium. He returned to the U.S. to join the faculty at Missouri State.

Chesman has performed throughout the United States, Canada, Australia, Belgium, France, the Netherlands and Portugal, performing on both the carillon and the organ. He plays Missouri State’s carillon every Tuesday and Thursday at noon for 30 minutes.

How to request your favorite song

Students are able to request songs by tweeting to @MSUCarillon with the hashtag #CarillOnMyMind.

Any more requests? Tag us and #carillOnMyMind with your song request.

Chesman has been taking requests for over a year now. “I want to find ways to connect with people so the carillon isn’t just something that plays music,” Chesman said. He thinks it is important for people to know there is an actual person up there playing.

Bringing Harry Potter back to the carillon pic.twitter.com/3GaE2A23Dk

“I did carillon because it looked fun and interesting,” Joseph Diaz, a music education major and carillon student of Chesman’s, said. “I’ve tried to publicize it by playing some theme song music such as Jurassic Park.” Chesman is in the process of getting audio and visual equipment set up in the tower so he will be able to stream live carillon concerts.