Zip lines defined a big part of my experience as a student at Missouri State.

I’ve always been scared of heights. I still am a little bit.

I got involved with a campus organization called Emerging Leaders. We went on a retreat, and there was a zip line that wasn’t that far off the ground. But I was terrified. Like shaking, crying, terrified.

The rest of the group was so encouraging. They were like, “It’ll be fine. Give it a chance.” So I did. I lived. I started to get over my fear.

A couple of years later, I went to Costa Rica, where — yup — another zip line. This time over a rain forest, where I thought back to the retreat.

Without that little zip line, I never would’ve soared over one of Earth’s greatest wonders. I had an amazing experience and was able to see a rain forest up close.

This illustrates that the culture at MSU inspires change and growth in a person. I’ve made mistakes. Sometimes, I thought I wouldn’t get another opportunity to lead. Missouri State has proved that wrong.

My name is Taylor Christopher, and I’m a Bear.

A chance to spread my wings and fly

In high school, I did not even meet the bar of being involved. I did less than the bare minimum.

I went to Tri-Valley High School in Downs, Illinois, where I was so shy. On top of that, I had very, very bad social anxiety.

I never would have been doing something like this, that’s for sure. I wouldn’t say I avoided conversations, but anything that would put me in any sort of spotlight or single me out at all was not my thing.

Now? I’ve been involved with these organizations since I started school here:

Coming from out of state, I didn’t know anyone here. I’m six hours away from home, so I thought rushing Sigma Sigma Sigma was a way to meet instant friends.

But the chance to serve was the real reason I fell in love with my organization. Their philanthropy slogan is “Sigma Serves Children.” My family’s volunteered with March of Dimes since I was 13 years old. I grew up thinking that children are a very important way to serve the community, so Sigma was a good fit. 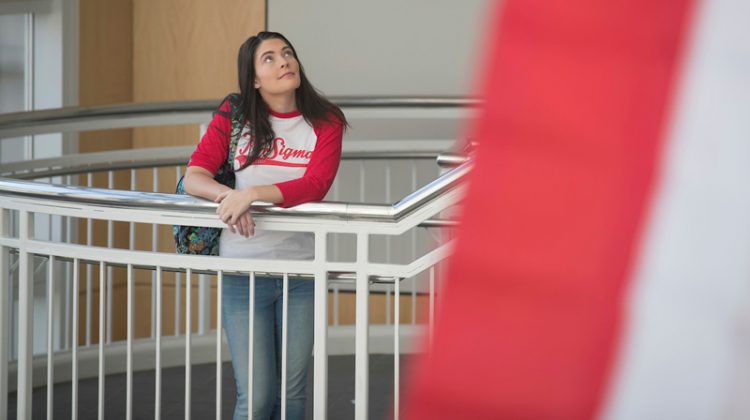 My family may have developed their love for helping others through higher education in Missouri … especially Missouri State.

The whole family grew up in De Soto, Missouri before they all moved to Illinois. Mom and dad both went to Missouri State. Two aunts went to Southeast Missouri State. Another aunt went to Westminster College and Webster University. My uncle went to Mizzou.

I never thought about going anywhere else. The family all lives in the same neighborhood now.

I grew up hearing all their college stories about schools in Missouri. So to me, it never crossed my mind to look outside of Missouri.

But I also looked at University of Alabama, because Illinois had its worst winter in two decades when I was applying. At the time, I wanted to go somewhere warm.

I’ve always loved Missouri. We’re huge fans of St. Louis sports teams. We loved the Rams until they left for Los Angeles. We go to Cardinals games all the time. My grandparents still live in De Soto. Missouri’s always been more of a home to me than Illinois.

Missouri State wasn’t super-publicized in my high school. I grew up in a college town like Springfield. Illinois State and Illinois Wesleyan weren’t far away, so those big schools advertised near me.

I only knew about Missouri State because my parents both went here. Plus, I received the Continue the Tradition Fee Waiver because I was a child of alumni. It’s incredible to be able to share that with my parents. They come back all the time.

They return for Family Weekend, and my sorority also does a moms and dads weekend.

Mom and Dad also come back for Homecoming, so they’re here all the time. It’s cool to be able to walk around campus with them and have them point out things that are different. They also tell me funny stories about things that happened on specific parts of campus. I enjoy getting to share those memories with them.

How financial aid paid for more than just tuition

I received the Board of Governors Scholarship, which has been amazing. Remember the zip line in Costa Rica? The scholarship made it possible with a small study stipend. For six weeks during the summer after my freshman year, I had the greatest experience of my life.

I’m majoring in global studies and minoring in Spanish, so you can imagine how perfect this was. I took classes in Heredia and taught English to preschoolers during the second half of the day.

My Spanish got a lot better through that program. Kids are so blunt and honest and will tell you right away if you’re saying something wrong. Adults beat around the bush and try and say it in a nice way.

That experience alone increased my Spanish knowledge by 100 percent. Kids will come out and say, “No, you’re wrong, say it again.” I was lucky to have gotten that scholarship. I’m not sure that I would have been able to have that experience without it.

A Bear for life

I fell in love with Missouri State the second we came to campus. It was such a welcoming environment. You could tell the University Ambassadors were so passionate about this school. And that was something I didn’t see at any other university I went to.

It was the kind of passion that you couldn’t fake. It was so obvious that these students loved where they went and were so proud to be a Bear, that I wanted to have that same feeling.

Still, I never expected to have such a life-changing experience at Missouri State. I love this school so much.

Even if you’re not super-involved, you can still feel like this is your home because of the people who are on this campus. We can all rally behind the fact that we love Missouri State and we love the Bears. I think that’s awesome.