“Ever since I was little, I have always wanted to help others and with the direct patient care that nurses are able to have I thought that it would be a good fit for me,” said Fengel, a BSN student.

Nursing runs in Fengel’s family as her mom, aunt, grandma and great grandma are all registered nurses. 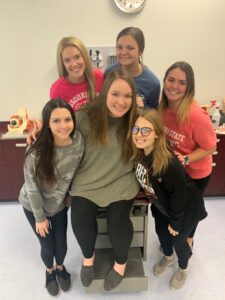 Fengel’s passion for helping others extends further than nursing. Currently, she works as a full-time Resident Assistant in Wells House. “I oversee 24 girls on a daily basis, and I love having the opportunity to work one-on-one with new students and impact their college experiences.”

Fengel is also Vice President of the Student Nurse Organization. “This has been a wonderful way for me to get to know future nursing students and be a resource for them along the way.”

In addition to her roles as RA and VP, Fengel is currently working on receiving a Distinction in Public Affairs. She has invested herself in Missouri State and helping those around her.

“I love to be involved in all things Missouri State!”

After graduating from Missouri State, Fengel hopes to work closer to home in the St. Louis area. Over winter break, she worked as an intern at a downtown St. Louis hospital and hopes to return there as a Registered Nurse.

Fengel has plans to continue her education and return to Missouri State in the future for the Nurse Anesthetist program.

Fengel’s advice to future nursing students is to “work your hardest and don’t be afraid of a challenge.”

“Nursing school is here to push you and help you learn skills that you never thought you could. I am so thankful for the friendships and relationships I have made while in the Missouri State Nursing Program. A quote that I always try to live by is ‘if your dreams don’t scare you, they aren’t big enough.’”