Morgan Spoor, a mother of four from West Plains, Missouri, wanted to be a nurse right after high school, but did not believe she had what it takes. She lacked confidence and did not think she was smart enough. She went on to get her degree in general studies and be a stay-at-home mother.

The opportunity to be a scribe in the ER presented itself and Spoor took it as her chance to see if she could handle the world of health care. It was just the validity she needed to solidify her dreams of becoming a nurse.

A few months down the road, her father was diagnosed with cancer and his prognosis was not good. He was given a few short months to live, and Spoor stepped in to care for him and get him to his treatments. The care the nurses provided for her father made her want to be a nurse even more and shortly after his passing, she applied to nursing school at Missouri State-West Plains.

The first time Spoor applied, she did not get in. Devasted, she applied the following semester and was denied again. Confidence was dwindling quickly. That is when Spoor and her husband decided to join the army.

In 2016, Spoor when to basic training and became a military police officer in the Army National Guard. She came out a new person and was determined to get into nursing school. For the third time, she was denied, however, this letdown wasn’t as disappointing when Spoor soon found out she was pregnant with their third child.

The excitement of a third child soon turned to devastation when they could not find a heartbeat at her 20-week ultrasound. Spoor was induced and their baby girl was delivered the next day. Spoor recalls the nurses who took care of her and showed her compassion and love during a difficult time. She longed to be that shoulder to cry on.

Seven months passed and the Spoors were blessed with another pregnancy. Excited and nervous, they went to the ultrasound. They not only found one heartbeat, but two. Twins were on the way!

Once again, adversity stepped in and a month later, Spoor lost her husband in a tragic accident. She was 16 weeks pregnant with twins and left alone to care for their 5- and 10-year-old children. Her faith pulled her through, and Spoor carried on.

“You do not realize now what I am doing, but later you will understand – John 13:7. This is a daily reminder that God has a plan for you. You may not understand it or see the why, but he does. It brings hope and gives me a purpose,” Spoor said.

At 22 weeks pregnant, Spoor was diagnosed with placenta previa, later hemorrhaged and was flown via Air Evac to Cox Hospital – Springfield where she was placed on bedrest the remainder of her pregnancy. She credits the nurses for keeping her grounded and sane during the entire experience. They went above and beyond to make the most of the situation. The nurses brought her favorite snacks, books, and crafts. During the height of flu season, they even managed to get Spoor weekly visits with her children. Overwhelmed by the nurses’ love and compassion, Spoor expressed her own desire to be a nurse.

That is when her nursing education truly began. The nurses would teach her the foundations and later quiz her as they made their rounds. Spoor was with them for six weeks and gained a wealth of knowledge.

At 30 weeks pregnant, she was rushed to the operating room for an emergency c-section. It was at shift change and as the nurses who cared for her clocked out, they continued to the operating room to be by her side. They held her hand, took pictures, and offered support. Spoor says they were the definition of caring, compassionate, and kind nurses. They stepped in, even when she didn’t ask them to.

The twins were born, weighing just 3lbs each, and stayed in the NICU for two months. Spoor met more amazing nurses in the NICU who comforted her through every breakdown and assisted with every diaper change.

Soon after being discharged, Spoor once again applied to nursing school.

Sitting in her car, Spoor received the news that she was accepted. Her eyes filled with tears of joy. She ugly cried all the feelings of excitement, hope, and relief. This was the next step in fulfilling her dream.

Spoor struggled in her first semester at Missouri State-West Plains and didn’t think she was going to make it through, but she didn’t give up. She studied harder and welcomed the encouragement of her instructors. 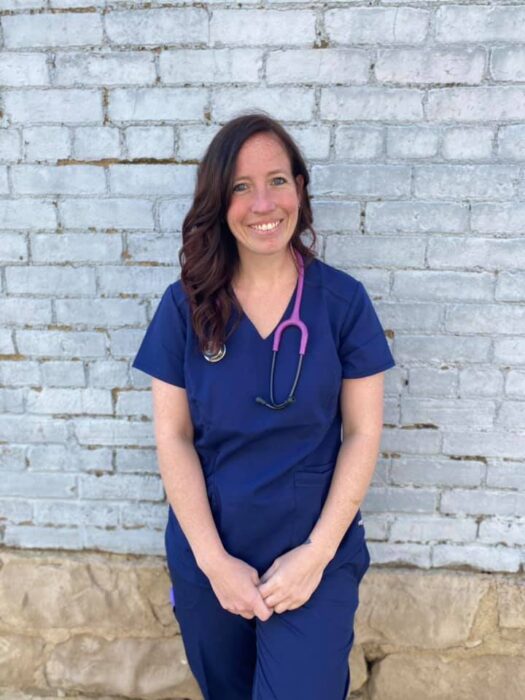 After two years, the hard work paid off. Spoor made it through clinicals, took on the COVID-19 pandemic, and successfully graduated in May 2021. Spoor went on to pass the NCLEX the following month and started a residency program at Ozarks Healthcare where she is now an emergency room nurse.

All the trials and hardships tried to knock me down, but instead I became more resilient. Every day I go to work, I think of all the nurses who took care of me and my family.

BSN-C Coordinator and Professor, Dr. Kathy Adams, describes Morgan as an amazing student, kind, and considerate to all. “She consistently works above and beyond expectations. She’s dedicated to doing her best, always! She openly and willingly assists her classmates with understanding difficult assignments and has faced every challenge with a positive attitude. Morgan is a true inspiration to everyone that has the pleasure of knowing her and I am very grateful to be one of those.”

Spoor plans to finish her BSN, build on her experience as an ER nurse, and hopes to become a flight nurse. Eventually, she plans to continue her education in graduate school.