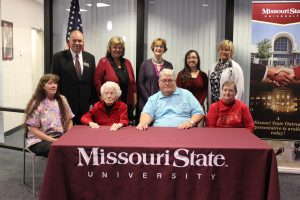 On Tuesday, October 11, 2016, the Marie Williams Trust Endowment gift was announced at MSU-Lebanon Outreach located inside the OTC-Lebanon Center. This “substantial six figure gift” is given to the Missouri State University Foundation for operations of the MSU-Lebanon Center upon Mrs. Williams’ passing.

Mrs. Williams has previously supported both the MSU and OTC Lebanon Center by purchasing naming rights to the state-of-the-art computer and student body lounge she also gifted to MSU. She currently funds a MSU/OTC-Lebanon scholarship of $1000 annually to students who have completed their associate’s degree from OTC-Lebanon and transfer to MSU-Lebanon for their bachelor’s degree completion.

A brief program was held to honor the gift and included Brent Dunn, MSU Vice President of Development, Dr. Joye Norris, Associate Provost in charge of MSU Outreach, among other invited guests from the community. Mrs. Williams recently celebrated her 101st birthday in June.

Communications major and English minor out to tell the stories of the world. Currently, the Web, Print, and Social Media Content Specialist for the Missouri State Outreach Marketing and Promotions office. She loves art and connecting with people! Discover Taylor at TaylorVinson.com