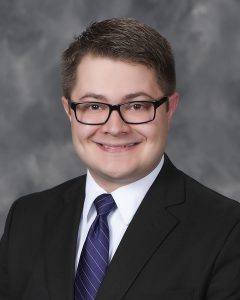 Thomas Limbrick ’13 is serving a two-year judicial clerkship with the Honorable Mary Rhodes Russell of the Supreme Court of Missouri. But he said it was earning a philosophy degree at Missouri State that helped prepare him for the rigors of law school and his burgeoning career. He credits mentors like Andrew Johnson and Jack Knight, whom he calls, “two of the smartest people I’ve ever met.”

“My course on ancient philosophy with Dr. Knight made me unafraid to tackle complex and voluminous readings. All of my philosophy classes, particularly Ethics and Contemporary Issues and Philosophy of Religion with Professor Johnson, familiarized me with the Socratic method of teaching and forced me to constantly come up with rational arguments,” Limbrick said.

Limbrick knew he wanted to attend law school before beginning his undergraduate studies. While in law school he took advantage of semester and summer breaks to immerse himself in many different legal fields. After his first year of law school he spent the summer working at Armstrong Teasdale, where he gained experience with employment litigation, construction, medical malpractice, real estate and intellectual property litigation. These experiences helped Limbrick pinpoint his interests in employment and labor law.

But the opportunity to clerk caught his attention as soon as he began law school. Limbrick said the application process includes gathering recommendation letters, writing samples, resumé and transcript. Limbrick said some judges begin accepting applications when students are in their second year of law school, so it’s best to begin the process early.

“Many lawyers consider clerking for a year or two to be one of the best jobs – if not the best job – to get straight out of law school. It is a unique opportunity to work closely with a judge and see how the other side of the courtroom thinks,” Limbrick said.

After completing his clerkship in 2018, Limbrick plans to return to his hometown of St. Louis and practice employment and labor law.