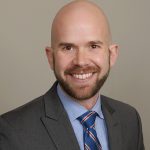 Andrew Shaughnessy remembers the uncertainty and insecurity he felt as an 18-year-old who moved to Springfield to attend Missouri State. A bright and eager student, he knew the path others wanted him to follow but didn’t know what he really wanted.

And then he took an introductory philosophy class.

“I blossomed, really – it was kind of an ‘aha’ moment whenever I went into that class; it was like, ‘Yes! I should be doing this,’” Andrew said. “It really became my world while I was at Missouri State.”

Andrew quickly declared a philosophy major and dove into his reading. He found inspiration in Plato’s Apology, which inspired him to determine his own values. As his texts challenged him, Andrew began to form clear ideas about what he believed and why it mattered.

This perspective helped him face other challenges, including the prejudice and resentment he confronted as a member of the LGBTQ community.

“There was a lot of hate that was directed towards me, but I knew better. I knew that their issues were their issues and not necessarily mine — and that their experiences really informed what they are doing,” Andrew said.

As he neared graduation, Andrew wanted to explore and apply what he had learned. After earning his degree, he spent a year teaching in Bordeaux, France. He then earned a master’s degree in human rights at University College London. He hadn’t planned to return to Missouri but felt drawn to his home.

“I felt a duty to come back and apply what I had learned abroad and what I learned at Missouri State; to apply that to my own community, to try and better my own community and my own state,” he said.

He parlayed that passion into five years with PROMO in St. Louis, where he worked on policies to decrease discrimination against members of the LGBTQ community. This included making 53 hospitals in Missouri LGBTQ-welcoming.

Andrew continues to work in public service, recently starting a position as a health policy officer at the Missouri Foundation for Health. He’s now focused on the expanding coverage initiative, which aims to lower Missouri’s uninsured rate to less than five percent in five years.

This work brings Andrew pride and fulfillment – even though progress is often incremental. “In policy — just like philosophy — the real value is there for all of the people that you help,” he said.