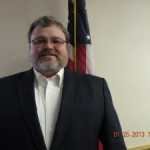 According to a story from the Bolivar Herald-Free Press, Chillicothe “was ‘very impressed’ with Chappell and his credentials.” Chillicothe Mayor, Chuck Haney, stated “What made (Chappell) stand out was his experience. He is very knowledgeable with numbers and budgets, brought to light by him helping bring Bolivar back from the brink of bankruptcy.” Bolivar Mayor, Chris Warwick “echoed Haney’s sentiments, saying Chappell ‘has been a tremendous help to the City of Bolivar.'”