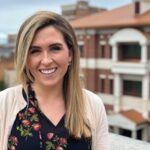 I grew up the daughter of an Army officer, so public service was (and still is) just a normal part of life. I realized in high school that city management and local government was a way for me to serve without having to get up for PT in the mornings.

Missouri State runs in my family – my dad graduated in 1979, I graduated in 2010, and my brother graduated in 2014. When I was in high school, I knew that I wanted to be a Public Administration major, thinking I wanted to minor in Public Law just for fun. I took an “Intro to Planning” GenEd class my freshman year of undergrad and realized that combining Planning with my Public Administration degree was what I wanted to do, so I picked up a Community and Regional Planning minor, too. Planners get to see, touch, and feel their communities in ways that most other professions can’t — it’s an honest to goodness SimCity game brought to life, but the stakes are real. I had an amazing opportunity to intern with the City of Springfield, MO starting in January 2009, carrying through to when I graduated in the spring 2010. That hands-on experience was critical in me knowing that I’d chosen the right career path, and I’m always grateful to my advisor for helping me find that.

After my time at Missouri State, I started my Master of Urban Planning degree at the University of Kansas – they had an accredited (by the Planning Accreditation Board) Master’s program. Accreditation helps speed up the ability to gain American Institute of Certified Planners (AICP) designation, which is a huge step for planners. KU’s program was built on policy formation, which was something that I wanted to build on. I was lucky – during my time at Missouri State, I was able to focus my policy papers on wildfire/wildfire mitigation, and continued that focus through my graduate program until I graduated in May 2012.

I found myself in Alabama because I was willing to be mobile and to wait for a position that truly interested me. Tuscaloosa, AL, home of the University of Alabama and the Crimson Tide, was the perfect spot for this young planner. I was hired in March 2013 to serve in an entry-level position as a Planner. I helped people with historic district applications and got involved in different task forces that were being formed because of the boom we were seeing in apartment complex construction. I was promoted to Zoning Administrator (an entry-management position) in July 2014, became the Associate Director of Planning in September 2016, and took the reins as the Director of Planning in September 2018.

Serving as the Director of Planning now after 6.5 years with the City, I work closely with everyone to make sure that our Zoning Ordinance and Subdivision regulations are being followed while also building relationships with our community and coming up with solutions. The City is currently in the process of updating the Comprehensive Plan for Tuscaloosa — a document we’re calling Framework. This plan for the City will serve us for years to come, and a legacy project for those involved. A lot of my time is spent drafting policies and interpreting old regulations — if you’d like to open a telegraph office in the city limits, I can tell you where! Planning (and public service) is about relationships – it’s building relationships with co-workers, neighborhood groups, developers, and the business community (among others), looking for consensus.

I’ve got four tips for future planners:
1. Find an internship in the planning field, in government, or something that shows you the real side of planning – just filing or doing clean up work for a group isn’t real experience. You have to see the nitty gritty, sometimes messy, interactions with the public to know that it’s something you’re truly passionate about.
2. Get a Master’s Degree. So much of our world depends on your willingness to spend that extra time in setting yourself apart. I know that I got my first job because of my experience and my degree.
3. Be willing to be mobile. My experience it’s the norm, and I know that. I have hired people from New Jersey and Indiana to come work for me, and they’ve been willing to take a chance on a location because of what we’re doing as a city. You can see that it took me nine months to find a job I was willing to accept. I was lucky enough that I was able to wait and not take the first position I was offered just because it was an offer. If you can’t wait, ask questions during the interview about what projects the community is working on, and research your community before you interview!
4. Find a community whose ideals align with your own. If you want to find a community who is passionate about neighborhoods and wants to preserve them – those exist. If you want a community that is developer-friendly – those also exist. You don’t want to find yourself in a place that doesn’t align with your own ideals, or you’ll find yourself fighting an uphill battle constantly.

As I look around Tuscaloosa today, it’s a different Tuscaloosa than the one I moved to 6.5 years ago, and I am exceptionally blessed to be in the position I’m in. I look forward to continuing to see changes in our community and I value being the one that folks come to talk to when they have big ideas. Planning is constantly evolving, and technology changing the game — the ability to use data (instead of gut feelings) to make decisions or recommend a course of action makes our community better and stronger.