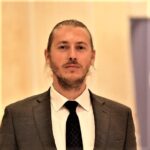 Arbër Fetahu is a 2018 alumni who was part of the USAID Transformational Leadership Program. The knowledge and experience gained through the MGS program has helped him in every step of his career.

His studies focused mainly on international relations theory, foreign policy analysis, comparative politics, and the politics of various world regions. Upon his return from graduate studies, Arbër was involved in research and initiatives with various NGOs in Kosovo.

Currently, Arbër is a Research Fellow at the Group for Legal and Political Studies, a think-tank institute in Prishtina, Kosovo. His work is primarily focused on foreign policy, public policy, democratization, European integration, and governance.

Arbër has numerous publications in the field of foreign policy, Kosovo-Serbia dialogue, and Kosovo-US relations. Arbër is often sought after by the Kosovo media for his analysis and comments about the country’s political issues.