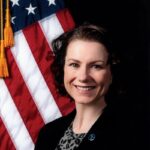 2005 MSU alumna, Jennifer Ashton, is a Senior Geospatial Intelligence (GEOINT) Analyst for the National Geospatial-Intelligence Agency (NGA) in St. Louis and a 2005 graduate of the then Master of International Affairs and Administration (MIAA, now MGS) program. Serving as an imagery intelligence analyst for NGA since 2009, Jennifer’s career has provided her a variety of exciting opportunities, from working overseas, supervising a group of military and civilian analysts in a 24/7 real-time full motion video office, and serving a joint duty rotation in the Presidential Daily Briefing office in Washington DC.

Headquartered in Springfield, Virginia, with additional offices in St. Louis and Arnold, Missouri, NGA is the lead federal agency for GEOINT and manages a global consortium of more than 400 commercial and government relationships. It is the world leader in timely, relevant, accurate and actionable GEOINT and provides world-class geospatial intelligence to policymakers, military service members, intelligence professionals and first responders in protecting the nation and responding to natural disasters.

A native of Wichita, Kansas, Jennifer graduated from Wichita State University in 2002 with a Bachelor of Arts in International Studies before setting her sites on Missouri State as an affordable option in the Midwest. It was in the MIAA (now MGS) program where Jennifer found herself amongst like-minded peers, eager to learn in the immediate aftermath of 9/11. It was during this time that Jennifer witnessed a major shift in political science curriculum as well.

Reflections on post-Cold War Europe, the Bosnian conflict, and the formation of the EU transitioned into introductions to comparative religions, extremist ideologies, and Middle East & Southwest Asian history. She and her colleagues, some who would become close friends, dove into these topics with fervor. Her time in the MIAA program, to include the guidance she received from her professors, not only solidified her desire to serve her government in a time of dramatic policy change but provided her the tools to think more deeply and to apply analytic rigor; tools that would eventually serve her well as an intelligence analyst.

However, it would take Jennifer another four years before starting her career in government service. Upon graduation, Jennifer joined her husband in Ft. Rucker, Alabama where he was attending Army Aviation School. After returning to Springfield, MO where her husband continued his job as a police officer, Jennifer landed an unpaid internship at the Center for Strategic and International Studies (CSIS), a foreign policy think-tank located in Washington DC. With the help of relatives in the DC area, she was able to afford the three-month stint where she participated in daily operations, academic events, and had access to the many publications authored by the Center’s experts.

Meanwhile, Jennifer began applying to listings on USAJobs.gov and had a few promising leads with the CIA, State Department and FBI, but it was NGA who invited her to an interview. She had never heard of NGA but soon became intrigued after learning of their reach as an intelligence agency and combat support agency under the Department of Defense. After receiving her conditional offer in late 2006, Jennifer applied for her security clearance, but it was a hiring freeze the following year that would delay her the longest. Determined not to let go of her dream career but to help pay the bills, Jennifer started her work as an administrative assistant for Missouri State’s College of Education and learned the hard lesson of paying her dues, patiently waiting for a start date at NGA.

When she swore into her new career in April of 2009, she found herself alone in a new city, with her husband on a year-long deployment to Afghanistan. With the passing of her father a month later and with no previous experience or connections, it was a rough start for the new analyst, but with the empathic support of her colleagues and the distraction of several intense months of imagery school, Jennifer soon found her way and continued to thrive.

She has become a subject matter expert within an office that serves military customers and policy makers, coordinating and managing her branch’s production of intelligence products and mentoring new analysts along the way. Next, Jennifer will be attending courses at the National Defense University and has her sights on branch management with hopes for another rotation in the Presidential Daily Briefing office. Her husband also found employment at NGA upon his return from his deployment. Both feel extremely blessed to live and work together for their mutual employer and hope for everything to go back to “normal” when the COVID pandemic subsides.

Though she realizes everyone’s experience is unique, if Jennifer had any advice for new graduates or Master’s degree candidates, she’d tell them first and foremost, never give up. Not everyone is lucky to get their career running right out of school. There will be setbacks, but they only provide lessons and experience that will you make you more thankful for when you do finally begin that job. Second, if you base your attitude in gratitude, it’s all gravy. That is, never take for granted the education, jobs or experiences you’ve been given. Especially in these troubled times, if you are lucky enough to finally gain entrance into the security of a government position or similar path, remember all those who are not as lucky. Finally, when you do get there, commit to your service. Find a mentor, push yourself into subjects that go beyond international affairs or foreign policy, such as data analytics, statistics, cyber, or artificial intelligence, and be that useful cog in the big machine. In the meantime, enjoy your studies and good luck!