Our Man in Kyiv, Glendal Wright, reflects on COVID in Europe.

Europeans like to spend their weekends protesting one thing or another. In the past few weeks, the effects of cabin fever seem to have been as contagious as Covid. It seems that the people are more concerned about cabin fever and the continuing possibilities of lockdown.

The divide between what the government officials want and what the citizens are willing to accept is pretty clear. The governments in Germany, France, among others, have reinstituted lockdowns, just as the citizens thought they were getting the vaccine and out of the restrictions.

While the government officials are focused on maintaining public health, the citizens seem intent on exercising their freedoms to move about and do what they want. The frustration with the slow pace of the vaccinations in these countries and the lockdowns has been too much for them to bear.

In Germany, Austria, Finland, Romania, Switzerland and Portugal over the past week; anti-lockdown demonstrators have taken to the streets with violent clashes with the police in many of the cities of these countries. 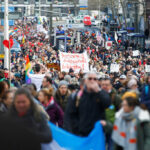 The different perspectives between the government officials and the citizens is clearly evident. Angela Merkel proclaimed “vaccinate, vaccinate, vaccinate,” and telling the German populace that they will need to apply an “emergency brake” to the relaxation of restrictions that had been initiated. But in the German city of Kassel, where large scale demonstrations erupted, the demonstrators marched under the banner “Free citizens Kassel—basic rights and democracy.” 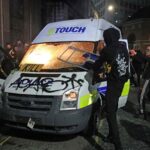 In the UK, Boris Johnson is reportedly going to introduce a bill in parliament to give more powers to the police to stop demonstrations that are noisy or cause “serious annoyance.” Hearing this the citizens of Bristol demonstrated by attacking a police station and setting police and emergency vehicles on fire.

The citizens appear to prefer to take their risks of getting Covid than continuing to be restricted in their homes and schools being closed. The effects of the months of lockdown and the resulting cabin fever is becoming too much for the people to bear.