In this holiday issue of Clif’s Notes, I review the budget announcement by Governor Nixon, summarize the actions taken at the Dec. 13 Board of Governors meeting, highlight this year’s Citizen Scholars and provide a summary of more than $8 million in private gifts made recently to Missouri State. 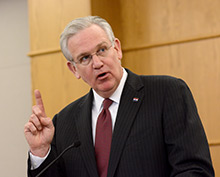 Last Wednesday (Dec. 11), Governor Jay Nixon was on our campus to announce that he plans to recommend a 5 percent increase in core funding for higher education as part of his fiscal year 2015 budget. As part of his announcement, he challenged Missouri’s public universities to keep in-state undergraduate tuition at their current levels.

As you can imagine, this was a very welcome announcement, and I indicated that I will recommend to our Board of Governors that we live up to the challenge. The governor will release his budget in late January, and the discussion in the Missouri General Assembly will be based on that. If the money is distributed on a performance funding basis as the governor recommends, we will receive more than a 5 percent increase as we have met all five of our measures for the second year in a row.

I will keep you posted as we move through the process, which begins Jan. 8, the first day of the 2014 session of the Missouri General Assembly.

Board of Governors actions

I want to summarize some of the actions taken last Friday at the Board of Governors meeting.

The Board approved two new academic programs: the Doctor of Nursing Anesthesia Practice (DNAP) and Master of Fine Arts (MFA). These programs had been approved by the faculty and were presented by Provost Frank Einhellig. The next step is for approval by the Coordinating Board for Higher Education.

Both of these degrees meet the needs of our students and of employers. They are very appropriate additions to our academic offerings and to the departments/colleges in which they reside. Learn more about the programs. 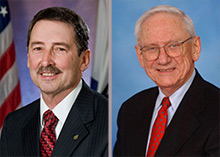 John Rush and James Tatum were approved to receive honorary doctorates. The two Doctor of Public Affairs (APD) degrees will be awarded at the May 2014 commencements. Dr. Ryan Giedd made the recommendation on behalf of the Faculty Senate.

Learn more about these deserving honorees.

Cannon Design was approved to design a new occupational therapy facility. Over the past several weeks, the College of Health and Human Services, our fastest growing college, has been working with a consultant to explore space needs and options. The occupational therapy program will begin in the fall of 2015, so this facility is a priority. I will keep you posted on this project as it moves along.

BKD reported its audit findings to the Board. It called the audit “clean and unmodified.” The BKD representatives were very complimentary of the University and indicated that Missouri State is in a strong financial position.

As is our practice, we honored the Citizen Scholars at the December meeting. The six recipients are highlighted below in “Telling the Missouri State story.”

It is a great group of students, and I congratulate them. 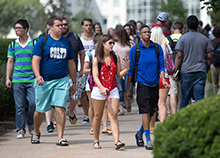 I invite you to review the background materials submitted on the topic and also to see the story the “Springfield News-Leader” wrote on the discussion.

More than $8 million in gifts announced

Yesterday (Wednesday, Dec. 18), the Missouri State University Foundation announced that it had received more than $8 million in gifts to benefit students, academics and athletics. The gifts will support new and renovated facilities; scholarships in a number of areas; and several academic programs.

I invite you to read more about the gifts in the news release.

Private gifts will continue to play a vital role in our success in the coming years. We very much appreciate the generosity of these donors. It is a great way to end the year.

I don’t know about you, but I am looking forward to the break. My break to-do list includes seeing the movie “Saving Mr. Banks,” finishing the latest John Grisham novel, traveling a little and spending time with family as I recharge for the spring semester. I hope you have a list that will recharge you, too.

2013 has been another good year at Missouri State University. Thanks for your good work. Gail and I wish you a safe and joyful holiday season and a happy new year.

This year’s Citizen Scholars are great examples of the three pillars of our public affairs mission. They are ethical leaders, culturally competent and engaged in serving their community. They make you proud to be associated with Missouri State.

Recognized by the Board of Governors during the December meeting, six students were selected as Citizen Scholars for their dedication to the public affairs mission of the University through course work, activities and service-learning opportunities. 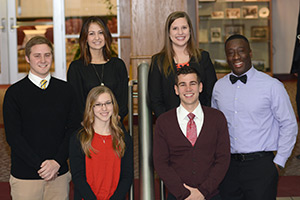 Congratulations to these students. I hope you consider nominating your outstanding students for next year’s award.