In this issue of Clif’s Notes, I provide a recap of Homecoming activities, discuss a naming gift for the welcome center, summarize two actions by the Board of Governors, highlight updates made to the University’s tobacco policy, invite the campus community to attend this year’s Public Affairs Convocation and remind the campus community about the United Way and Missouri State Way campaigns. 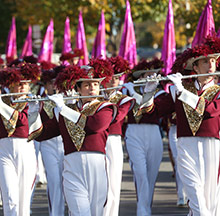 Last week we welcomed the University’s alumni and friends to campus for Homecoming. The celebration started on Sunday and Monday with a series of campus decorating contests. On Tuesday, students showcased their singing and dancing talents at the annual Rockstar karaoke competition. On Wednesday, students celebrated Maroon and White Night with a chili cook-off and concert. On Thursday, the campus community cheered on the University’s fall athletes at the Yell-Like-Hell pep rally, followed by a headphone disco Homecoming dance. Student organizations participated in physical and academic challenges at Friday’s Field Day. That night the University presented awards of special recognition to six alumni and friends of the University at the Distinguished Bears Dinner and Awards Ceremony.

Saturday brought the Homecoming parade, the Maroon and White Basketball Scrimmage and tailgating at BearFest Village. That afternoon, we cheered our Bears to victory in the Homecoming football game. Students, friends and alumni of Missouri State filled downtown Springfield that evening for Bears on the Square festivities.

We had a fantastic Homecoming week, and I want to thank everyone who helped make it so.

As you know, our new welcome center is under construction at the corner of National Avenue and Bear Boulevard. Last Thursday we announced that Warren and Anne Davis and Patrick and Kim Harrington have given significant contributions, making the construction of the welcome center possible. In recognition of their gift, the building will be named the Davis-Harrington Welcome Center. A special thanks to the Davis and Harrington families and all the other private supporters who made the new “front door” to our campus a reality. 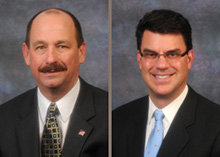 Board of Governors actions

The Board met on Friday, Oct. 17. I want to summarize two actions taken at the meeting:

The Board also discussed the breadth and value of faculty research. This discussion involved presentations by three faculty members: Paul Durham, Michael F. Murray and David Mitchell. The Board received copies of the second edition of Mind’s Eye to facilitate the discussion.

To ensure a healthy learning and working environment by promoting a culture of health and wellness, the University became a tobacco-free campus two years ago. The University has updated the Tobacco Use Policy to address products and devices that have become popular more recently.

The new policy clarifies that “the use of devices or products that may be used to smoke or mimic smoking (including bongs, hookahs, vaporizers, etc.)” is prohibited on campus. If you would like more information about smoking cessation, please contact the Taylor Health and Wellness Center at 417-836-4064.

The Fall 2014 Convocation Lecture is 7 p.m. Oct. 28 in the Juanita K. Hammons Hall for the Performing Arts. This year’s lecturer is Eric Greitens. Mr. Greitens is a former Navy SEAL, a Rhodes Scholar and the award-winning author of our common reader for this year, The Heart and the Fist: The Education of a Humanitarian, the Making of a Navy SEAL. The lecture is free and open to the public, but it requires a ticket for entry. Tickets are available at the ticket offices of Hammons Hall, JQH Arena and Plaster Student Union.

We only have three weeks until our celebration luncheon on Nov. 10. If you would like to participate in one or both of these campaigns, please remember to complete and submit the forms in the packets you received.

Homecoming brings thousands of people who have been affected by the University to campus. It is a reminder of our rich history. I look forward to working with you to continue this tradition of excellence. Thanks for all you do for Missouri State University.

Missouri State alumnus looking to dance his way to fame

Recent Missouri State University alumnus Darrell Hyche did not become serious about dance until his senior year of high school, but he is already starting to make a name for himself in the dance world.

“I had very little dance training before attending MSU,” said Hyche. “What initially started off as elective courses snowballed into a major, thanks to the guidance of the dance faculty.”

Hyche, who graduated in May 2013 with degrees in dance performance and psychology, was a member of Missouri State’s Inertia Dance Company, which promotes cultural literacy through performances and workshops; choreographed and participated in several Homecoming and Greek Jam performances for Phi Gamma Delta fraternity; and danced with the local step group Spazzed Out.

“Who I am as a dancer is largely due to the creative freedom I had and the encouragement and experience gained from the theatre and dance program,” he said.

Dance has grown from a hobby to a profession for Hyche. “My ultimate dream is to have a sustained and meaningful career in dance,” said Hyche. “Our time is short here so I just want to embrace each opportunity I’m given to continue to do what I love.”

Hyche is getting closer to making that dream come true, as he is one of the newest professional members of Modern American Dance Company (MADCO) in St. Louis, Mo. He works with choreographers to interpret and execute dances with speed and precision.