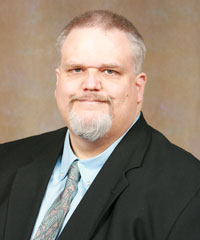 David lives the pillars of civic engagement and ethical leadership through his devotion to improving the safety and security of both man and animal in Springfield, Greene County and SW Missouri.

Since 2009, David has been volunteering with the Springfield-Greene Co. Office of Emergency Management (OEM). His initial involvement as a volunteer evolved into serving as a Community Emergency Response Team member. He soon transitioned to the OEM reserve, where he supports the staff in the event of a disaster and takes part in several responses, drills, and exercises.  His passion for animals has David devoting time caring for the animals housed at Springfield’s Castaway Animal Rescue as well as being a driving force to develop a county-wide Animal Response Team.  David recently wrote a $5,000.00 grant for needed equipment and training.

David also volunteers with the Region D Incident Support Team as a Geographic Information System Specialist and Unit Leader.  During the Joplin tornado in 2011, David’s interest in amateur radio gave him the opportunity to assist in communication efforts via the Greene County Amateur Radio Emergency Services.  He is also called upon during natural and other disasters as a member of the US Health and Human Services National Disaster Medical System to help ensure medical care provisions during a disaster. In 2001 he headed a medical strike team to the World Trade Center attack and another to provide coverage for the 2006 State of the Union address.

Beyond this, David is a Lay Eucharistic Minister for All Saints Anglican Church and voluntarily working toward ordination as a deacon.  We are delighted to recognize David Johnson as the March Public Affairs Faculty Spotlight for his significant contributions both locally and nationally!