Tyler Durham reflects on his time at Missouri State University and how his involvement with R.E.A.L. Bears has given him a deeper love and pride for his alma mater. 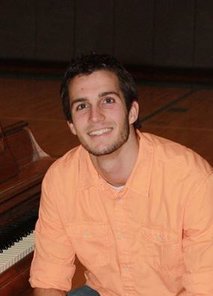 Hobbies: Other than music and movies, being outdoors-especially playing Ultimate Frisbee!

Interesting Childhood Memory: Performing a “Men in Black” dance routine when he was eight.

Embarrassing College Memory: Having to perform the Bunny Hop in front of President Smart and many other esteemed alumni and faculty. He has R.E.A.L. Bears to thank for that.

Let me introduce you to Tyler Durham, an esteemed R.E.A.L. Bear member. An individual who admittedly enjoys academia, Tyler is a successful college senior, as well as an accomplished musician, having already received awards for his work.  On a lighter note, he is someone who will never turn down leftovers, but he is skinny as a rail.  Tyler, a Nixa native, did not have to travel far to find his place at Missouri State University. He came to the University to pursue his passion for music and film – his two favorite things in this world – and chose a major in music composition and a minor in recording arts. Upon graduation, he plans to attend graduate school for film scoring (the original composition of music to accompany film). He has been known to take well-known films and produce his own music for them, for fun. When asked, “If money and success no longer mattered, would you chose a different path for your life?” he replied, “Absolutely not. I am pursuing my dream job and wouldn’t want to do anything else in the world, unless I am not currently aware of any Indiana Jones positions that are available.” His reply clearly shows his true passion for music and film and the happiness it will bring him throughout his life.  In addition, it shows that he really is all about having fun. Maybe someday there will be a new Indiana Jones movie made that he will be asked to score! Now wouldn’t that be the best of both worlds?

Tyler credits much of his success thus far to the opportunities Missouri State has offered him. He has very much enjoyed the projects he has worked on through the music, film and journalism departments, as well as the opportunity to work with students, actors and other talented individuals. This collaborative work is something he truly values. Along with the opportunities the University has given him, he also attributes his success to his involvement with R.E.A.L. Bears. From general member, to the 2013-14 school year vice president, and back to general member, Tyler has learned how to expertly interact with professionals. He is astounded by the number of accomplished individuals he has met because of R.E.A.L. Bears and loves the sense of pride the organization has given him. He now truly understands the importance of being proud of where you come from and all the opportunities you were given there.

Tyler was first introduced to R.E.A.L. Bears by his good friend Taylor Juenger, 2013-2014 president, and he would recommend R.E.A.L. Bears to anyone at the University. He wishes everyone would be able to experience one of the most welcoming, rewarding and fun organizations he has ever had the pleasure of being involved in. One of the most important skills R.E.A.L. Bears has taught him is how to interact with others in a professional way, a trait Tyler claims is indispensable. Other than giving a freshman the advice to join R.E.A.L. Bears, he would also tell them to try everything!  He stresses the importance of finding things that truly interest you by using this quote from Jim Carrey, “Life opens up opportunities to you, and you either take them or you stay afraid of taking them.” From Tyler, we should all learn to be passionate about what we do and to enjoy life. There is no question that he will love all opportunities that this path has to offer him in the future, and he will have fun doing it every step of the way.