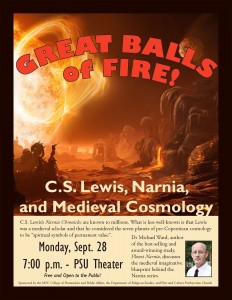 The Department of Religious Studies is excited to announce that we will host a guest lecture by renowned C. S. Lewis scholar, Dr. Michael Ward!

“Great Balls of Fire: C. S. Lewis, Narnia, and Medieval Cosmology” will be Monday, 28 September 2015, at 7:00 p.m. in the Plaster Student Union Theater. This free lecture is open to students, faculty, staff, and the general public.

C.S. Lewis’s Narnia Chronicles are known to millions.  What is less well-known is the fact that Lewis was a medieval scholar and that he considered the seven planets of pre-Copernican cosmology to be “spiritual symbols of permanent value”.  Dr Michael Ward, author of the best-selling and award-winning study, Planet Narnia, discusses the medieval imaginative blueprint behind the Narnia series.

Dr Ward is a Fellow of Blackfriars Hall, University of Oxford, and Professor of Apologetics at Houston Baptist University, Texas.  He is the author of Planet Narnia: The Seven Heavens in the Imagination of C.S. Lewis (Oxford University Press), co-editor of The Cambridge Companion to C.S. Lewis (Cambridge University Press), and presenter of the BBC television documentary, The Narnia Code.  On the fiftieth anniversary of Lewis’s death, 22nd November 2013, Dr Ward unveiled a permanent national memorial to him in Poets’ Corner, Westminster Abbey, London. 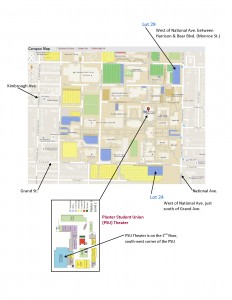 This event is sponsored by the College of Humanities and Public Affairs, the Department of Religious Studies, and First and Calvary Presbyterian Church