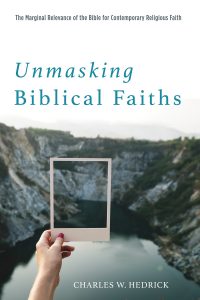 Dr. Charles W. Hedrick, Emeritus Distinguished Professor of Religious Studies, has just published another book with the Publisher Wipf and Stock in their premier Cascade Series. The title is: Unmasking Biblical Faiths: The Marginal Relevance of the Bible for Contemporary Religious Faith.

Hedrick says that his book aims to address many of the challenges to traditional Christian faith in the modern world. Since the eighteenth century Age of Enlightenment, human reason, formerly tethered by the constraints of organized religion, has been set free to explore the universe relatively unchallenged. The influence of the Bible, on the other hand, weakened due to the successes of modern historical criticism, is found to be inadequate for the task of enabling the faith “once for all delivered to the saints” (Jude 3), in that it cannot adequately respond to the many questions about religious faith and the world that human reasoning raises for modern human beings. In a series of short but tightly reasoned essays, Charles Hedrick explores the confrontation between traditional Christian faith and aggressive human reason, a conflict that is facilitated by Western secular education. (From the back cover)

Hedrick says he was brought to write this book upon his retirement (2004), purposing in the closing years of his life to analyze critically his own personal religious beliefs and his place in the world. The essays are brief but collectively they form a cumulative argument that the Bible is only marginally relevant for developing a religious faith for the contemporary world. The book represents the results of ten years of critical reflection (2007-2017) on subjects related to religion, ethics, the Bible, the nature of the world, and human values. Speaking frankly Hedrick says of the book, “I was disappointed to find that many of the fundamental ideas of my own personal religious faith did not stand up to rational scrutiny.”

Hedrick explains that the book does not offer many definitive answers to the perplexing questions raised by an impartial study of religion, for religion is primarily opinion based. What he does promise readers, however, is that the book will take them on a rationally sound journey into selected details of religious faith in the twenty-first century.