In the exhibition titled “Away from Home: Paintings by Annie Wedler,” she explores the “intersection of the majestic and the mundane found on the fringe of developed areas of Alaska.”

Wedler is currently an assistant professor of drawing and painting at the University of Alaska Southeast in Juneau. She describes Alaska as a place where people are “pioneers,” “man-made structures are reclaimed by the natural world at an alarming rate” and the harsh weather “distorts and eventually destroys anything foreign.”

“I am attracted to the beat up dirty old satellite dishes and electrical wires that populate the communication hubs, residential neighborhoods and ruins,” she said. “They are a kind of industrial ornamentation. They exist in various states of decay.”

Wedler earned her bachelor’s degree in drawing and painting from MSU in 2005. She has an MFA in painting from Indiana University School of Fine Arts in Bloomington.

Wedler has had several solo and small group exhibitions in Alabama, Alaska and Missouri; as well as many national and international group/juried exhibitions, including galleries in Budapest, Hungary, where she was an artist-in-residence in 2013. 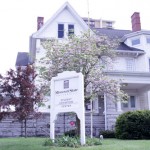