From June 8th until July 7th, 2015, I participated in the field school sponsored by Missouri State University in the Valles Caldera National Preserve (VCNP). The VCNP is located outside of Jemez Springs, New Mexico. The main objective of the field school was to introduce students to the varied archaeological methods that are used during a pedestrian survey, site conditions assessment, and shovel testing. The field school also included several field trips that introduced students to the different archaeological site types, Southwestern archaeology and the state of New Mexico in general.

The majority of the field school was spent conducting a pedestrian survey in the VCNP. The survey area was almost completely forested and ended at the Jemez River which flowed at the foot of a mountain. Needless to say, we had some beautiful views on our cookie and lunch breaks. However, the area also has an abundance of downed trees along with large boulders. Lesson one in our field school was learning to hike over or around these while trying to keep on our transects (those are imaginary lines that we follow as we look at the ground) and not lose our compasses (which I did when I tripped over a limb). In some cases, the forest was so dense that the only way to keep tabs on the people to your right or left was to literally stop and listen for them. Overall, we found eleven sites while surveying. These were mainly large artifact scatters consisting of obsidian. We did find several historic artifacts and features that included metal cans, bottle caps, a 4×4 trail, telephone wire with insulators, and a campfire ring.

The last section of the field school consisted of completing shovel testing at two of the previously recorded sites along with a site conditions assessment at a third. For all three of these we had to bring equipment out to the field with us. This included shovels, screens, tarps, paperwork and clipboards, trowels, measuring tapes, meter sticks, whisk brooms, dustpans, flags, string line, etc. In the case of the site conditions assessment, we also had to trek out to the site with the total station and stadia rod. Since we were not allowed to collect any of the artifacts due to the National Parks System’s policy of non-collection, all the artifacts had to be analyzed out in the field. We also had to replace them based on which level we found them in while back filling the holes and trenches. Excavation for the site conditions assessment also included a stipulation that we could only excavate 0.01 percent of the total site. This meant that our three excavation units were 25cm x 25cm or 25cm x 50cm versus the usual units that are 1×1 meters or 2×2 meters.

The field trips were planned to give us students an insight into Southwest archaeology and in jobs available in cultural resource management. We took several trips with the VCNP archaeology crew including a rockshelter tour that was held up by a hailstorm while we were in one of the rockshelters. We also got to visit several sites within the Los Alamos National Laboratory (LANL) lands with the LANL CRM crew. On our own, we visited Chaco Canyon, Bandelier National Monument, and Taos Pueblo among other sites. However, the best part of the field school had to be seeing Jurassic World in Los Alamos. Only a bunch of anthropologists would belly laugh at “I was trained by the Navy, not the Navajo!”. 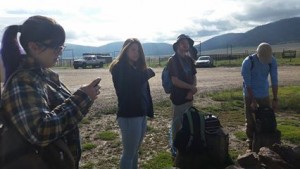 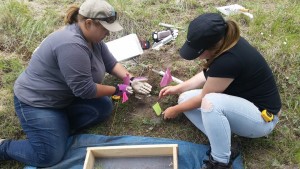 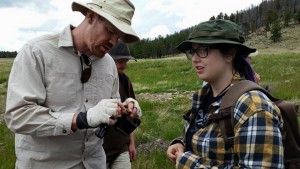