For my last summer (2016) as a student at MSU, I wanted to broaden my archaeological skills and experience. I decided to apply for a PIT (Passport in Time) position with the Forest Service in the Oglala National Grasslands, to conduct site research and interpretation for Hudson Meng (25SX115), in NW Nebraska. The purpose – to participate in their public education in archaeology program. Hudson 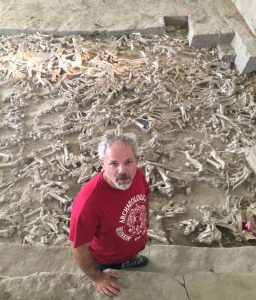 Meng, hereby referred to as 25SX115, is an important paleo period site. It is situated at the cusp of the High Plains, in the middle of the Nebraska Badlands, within eyeshot of numerous buttes and the Black Hills. The site is unique, in that it has served as an oasis in a rather desert like environment since the early Holocence period. As part of the Fossil Free
way, it was a stop for prehistoric lifeforms from at least the middle Miocene, as nearby fossil evidence of; Entelodont, Hyenadon, Columbian mammoths, Smilidon, etc. have shown. But the particular extinct fauna represented at 25SX115 are hundreds of evolving Bison Antiquus. These beasts were once Bison Latifrons, and had a 7ft. horn span. As Bison A., they sto
od up to 9 ft. at the shoulder, but were leaner and downsizing to the buffalo we know today as Bison bison.

I did several things in this project. First, I joined Gene Gade, president of the Vore Buffalo Jump Committee, as well as Wyoming state archaeologist, Dr. Greg Pierce, a 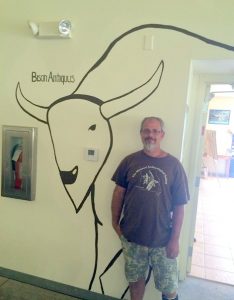 nd asst. state archaeologist, Marcia Peterson, for a week- long field survey of the Vore Buffalo Jump in (Sundance) Beulah, Wyoming. With over 44,000 bones, this site was active ca. 1500 – 1800 and shows 22 distinctive bone layers. A four story drop into a 200 foot- wide sinkhole was utilized in a drive approx. every 13 years by the Lakota Sioux, Kiowa, Arapahoe, Cheyenne, and Pawnee. We recorded dozens of rock cairns or dead men, which were used in gaps where bison could escape during drives. Cloth and brush was tied on them to blow in the wind, and they were spaced out evenly.

From the Vore Buffalo Jump survey it was back to 25SX115 for 3 more weeks. At 25SX115, I did guided tours every day. The rangers were all very hospitable. I really enjoyed working with the exhibits and interacting with the public to present their local history, and explain how archaeology works. I gave atlatl demonstrations which was always fun, and I made some new friends. When there were days off I took advantage of the local sights and sounds including Devil’s Tower, the Mammoth Site in Hot Springs, the Trailside Museum, and Fort Robinson. 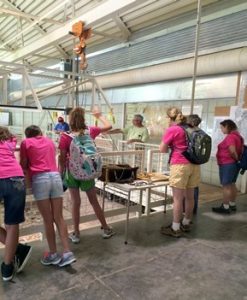