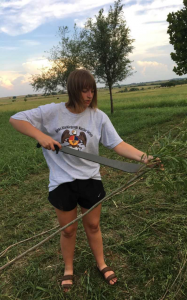 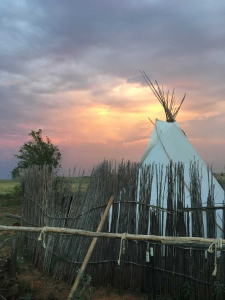 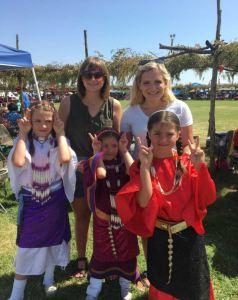 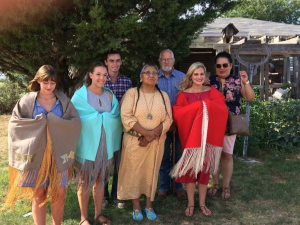 My experience on this field school that took place in Anadarko, Oklahoma, was really interesting. I went into it with an interest in linguistic anthropology and language in general, so I knew that I wanted to study the languages of the tribes we were studying. About a week and a half in, I noticed a reoccurring theme that the languages were struggling, especially Kiowa. However, there were a number of programs within the schools and community that were dedicated to teaching the Kiowa language. This became my project: preservation of the Kiowa language.

Besides learning about the language, we also experienced many things in the area. We attended a multi-tribal powwow, the annual Kiowa Gourd Clan Ceremonial, a meeting for the Comanche Indian Veterans Association (CIVA), trips to museums, seeing the Washita Massacre site, participating in a Sweat Lodge, watching an Osage dance, being dressed in traditional Kiowa clothing by our host family, putting up tipis, all along with doing about 25 interviews. Although we were able to participate in so many unique and wonderful events, three of them particularly come to mind.
The first was the intertribal powwow that we watched. The powwow took place near Anadarko, but was held on the Wichita dance grounds. It was sponsored by a single family, but it was open to anyone who wanted to attend. The powwow was also a dance competition, so we were able to see and hear many different dances and songs, my favorite of which was the fancy dancing. This was also very significant to me, as it was one of the first cultural events we were able to attend and it was so inviting to the culture.

The next was being able to participate in the Sweat Lodge. Not only were we able to experience being in the Sweat Lodge, we also helped our host family to set the lodge up. Once the lodge was built, our host brother, Gabriel, guided our experience inside. This experience was something I will remember for the rest of my life, and is my favorite thing we did on the trip.
The last thing was our host family dressing us in traditional clothing. This was something that they had never done before and it was very special to be allowed to do. They helped us to pick out the garments that would fit and helped us to put them on properly. They even allowed us to hold the feather fans. We were able to take pictures, which I’m sure myself and the other students will keep forever.

Overall, my experience was absolutely amazing. From studying the language, to going to all the cultural events, to meeting our amazing host family, this field school truly showed me what a life in anthropology will be like.